Why Does Australia Have A Muslim Immigrant Problem? 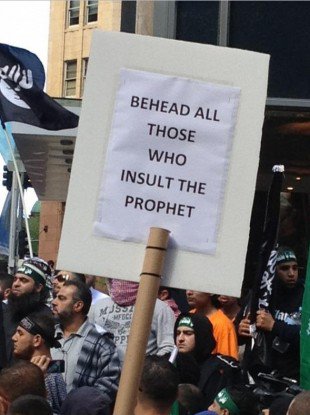 Brenda Walker’s blog Australia: Geert Wilders Helps Organize Pro-Freedom (Anti-Islam) Party is a reminder that a large share of recent immigration there has been Muslim: unquestionably the most immediately dangerous type as attendees of last year’s Boston Marathon found out. The wonderful Refugee Resettlement Watch has a timely supplementary: UK: Muslim immigrants make their move to take over public schools.

The situation Down Under is so bad that even some MSM Open Borders types have honorably changed their minds as I noted in Australian Media Bigfoot Greg Sheridan Declares Against Muslim Immigration—Where Are U.S. Counterparts?

It takes Sheridan almost 4,600 words to say this! Partly because it is clearly a painful retraction:

"...once I wholeheartedly supported multiculturalism, I now think it's a failure and the word should be abandoned".

When can we expect to see similar American MSM icons—like Thomas Friedman or Al Hunt—be as responsible?

But the real outrage is deeper: for most of the 20th Century the country was protected by the “White Australia” policy, which developed because the electorate in this (then) deeply democratic society realized that they were likely to be swamped by other races flocking in to take advantage of the superior organizational skills of the Whites.

Not only was this sensible and reasonable policy recklessly abandoned in the 1970s but anti-free speech legislation has made it and related matters very difficult even to discuss - as we reported in Banned In Oz, Posted On VDARE.COM: Fraser's "Rethinking the White Australia Policy" (With Comment By Peter Brimelow)

How and why this atrocity was engineered is definitively analyzed at Kevin MacDonald’s Occidental Observer site here.