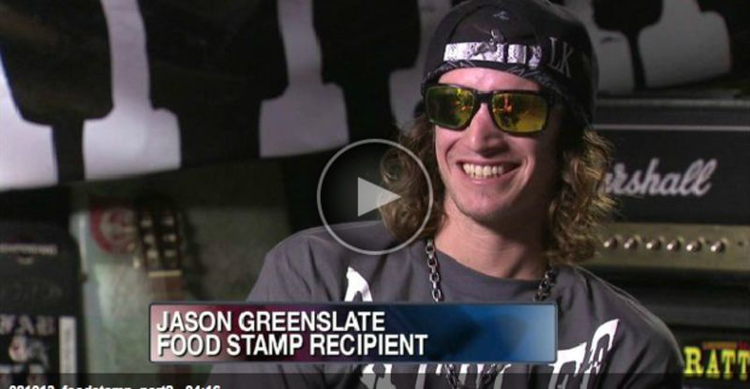 Why Did The Food Stamp Surfer Get So Much Notice? Because He's White

A woman called Emily Badger has a post on the Atlantic's website titled Enough Already With the Food Stamp Surfer.[September 27, 2013] "Enough Already" in PunditSpeak means "Stop talking about that! It's wrong for you to talk about it!" It usually means some kind of nerve has been touched.

I hate to give Jason Greenslate any more mention. But now he's jumped not just from a California beach onto Fox News and into Congressional talking points, but all the way across the Atlantic into the pages of the latest Economist.

Greenslate, if you happen to have missed him, is the surfer unearthed in La Jolla during a Fox report on "The Great Food Stamp Binge." He is everything you'd want in an argument against the importance of federal food aid: Greenslate says he spends his money on sushi and lobster and devotes his abled body to a "demonstrably awful" rock band. And he seems downright delighted to dine on the taxpayer dime. "It's free food," he tells Fox. "It's awesome."

He is also, of course, insanely unrepresentative of the 47 million Americans on food stamps...

...(most of whom are forced by circumstances to understand they shouldn't blow their few hundred bucks a month on low-calorie, high-cost containers of store-bought sushi). But that hasn't prevented his story from magically multiplying: Here a talking point from Eric Cantor where warns of "young surfers who aren’t working, but cash their food stamps in for lobster."

Once again, because he's white.That's why Fox News and Eric Cantor are bashing him—because it's safe. (Not that he doesn't deserve, it, lazy bastard that he is.)

Would Fox News be posting self-revelatory interviews with Sharon Jasper, the black  welfare recipient with a big screen TV? How about the Obamaphone lady?:

Blogging about her was racist, but Jason Greenslate is a safe target.