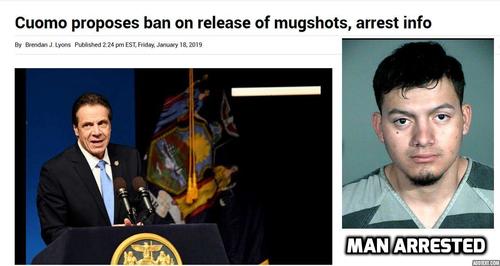 Why Can't We Find Out Immigration Status Through FOIA?

As any regular reader of VDARE.com knows, our hopelessly corrupt media establishment goes to great lengths to suppress information about race and crime. That's why it's a blessing that mugshots of the arrested are made publicly available online. In an age of universal deceit, we need online sleuths to do "jobs that Americans [in the media] won't do" and report details that the Main Stream media intentionally tries to keep hidden so the public availability of mugshots is a very powerful tool at our disposal. The Left has caught onto this and is now actively trying to stop the public release of mugshots.

Governor Andrew M. Cuomo has proposed banning the public disclosure of "mugshots" and "booking information" compiled by law enforcement agencies when they make arrests... Many law enforcement agencies routinely post mugshots and arrest information on their websites and also send the information to news agencies... In recent years, as non-traditional digital sites have gained prominence, the policies of many news organizations have changed, and their websites now often report on people arrested for misdemeanors or non-criminal violations. The details of the arrests, and copies of mugshots, are usually gleaned from the websites of police agencies, which routinely post the information. [Cuomo proposes ban on release of mugshots, arrest info, by Brendan J. Lyons, The Albany Times Union, January 18, 2019]

Democrats like Cuomo will claim that they are only trying to protect the accused's right to privacy but this newfound respect for privacy seems disingenuous considering that Democrats have been pushing for years to publicize the information of who is licensed by the state to own a gun.

The bill, introduced by Rep. Stephen D. Dargan, D-West Haven, co-chairman of the legislature's public safety committee, would make public the names and addresses of permit holders under Connecticut's Freedom of Information Act — and would reverse lawmakers' decision to protect that personal information from disclosure nearly two decades ago... "Most things are FOI-able now," Dargan said in an interview Thursday. "Go to the local city clerk's office and you can find out where Steve Dargan owns property," as well as what cars a person owns and perhaps some of his debts. "I don't know why a responsible gun owner is worried about whether a permit for a revolver is FOI-able or not." Debate Begins Early Over Bill To Disclose State Handgun Owners' Names, Addresses,  by Jon Lender, The Hartford Courant, January 3, 2013]

The obvious truth is that the Left knows if too much information gets out about who's "doing the raping", the public might start recognizing patterns. The sad reality is Cuomo will probably get what he wants (both about concealing mugshots and publicizing gun ownership) because the cucked New York state Republicans are utterly defeated but this should be a learning experience for us to get the public release of more information which might help Americans recognize other patterns.

For instance, has anyone on our side ever explored why you can't FOIA request the immigration status of third parties without their consent? I'm not aware of any legal precedent why citizenship status of immigrants cannot be made publicly available so I'm thinking it's based on a statute which, if true, means it can be changed by legislation. All the research I did just resulted in emotional responses from immigration lawyers like "what business is it of yours" and nothing concrete like "it was ruled to be an unconstitutional violation of the right to privacy" which I think even if a liberal circuit court ruled that way, it would be overruled by a Trump Supreme Court.

Why can't there be a publicly available database of the immigration status of immigrants? I'm thinking either ones who have come here illegally and been deported, or came here legally and then overstayed a visa or the myriad other ways illegals get here. You wouldn't even need too much personal information which might be used for identity theft (that would be the Democrats biggest argument against it) since their photo should be enough with facial recognition software to confirm their identity.

Think about it; if immigration status was made publicly available, we could expose how much crime is caused by illegal immigrants. We could also expose employers using illegal immigrant labor. This might not have been thought of when E-Verify was created in the late 90s but now with the widespread usage of the internet and social media, such a thing could be extremely useful!

As it currently stands, even law enforcement has a difficult time discerning the immigration status of a criminal suspect and are sometimes actually prohibited from even checking in certain Democrat controlled states. If we made it public knowledge, it could be a game-changer!