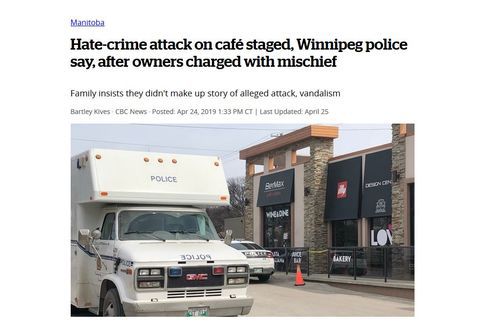 From CTV News in Winnipeg, Canada on Easter weekend:

Winnipeggers organizing to take stand against hate after anti-Semitic act

Police said emergency crews responded to a call at the restaurant located in the 1800 block of Corydon Avenue around 10:45 p.m.

Winnipeggers are coming together to take a stand against hate and show solidarity after a River Heights restaurant became the scene of a hate crime investigation.

An interfaith prayer vigil has been organized Thursday from 6:30-7:30 p.m. to take place at Westworth United Church.

It will mark one week since BerMax Caffé and Bistro on Corydon Avenue was severely vandalized and a woman working there was assaulted. …

“We are witnessing are sharp and frightening increase in antisemitism worldwide. This shocking incident reflects the importance of us coming together as a city, a province, and a country to stand up against hate,” said Belle Jarniewski with the Jewish Heritage Centre of Western Canada in a press release Saturday.

“There is no room in our city of Winnipeg for hate, terror or violence directed against Jews or any other group of people. We will continue to build bridges of compassion and understanding,“ said Rev. Loraine MacKenzie Shepherd.

People of all faith communities within Winnipeg are invited to come together in prayerful support of the victims of anti-Semitic hate crimes.

Prayers and remarks will be offered from different faith traditions for support of the Jewish community and for healing and compassion, the release said. ….

This seems like Our New Religion: the Good People get together to show how much they hate those Evil Haters.

But from CBC News today:

An anti-Semitic attack originally called “the most brazen” the city had seen was staged by the owners of the restaurant that reported it, Winnipeg police say.

All three owners of the restaurant have been arrested and charged with public mischief since the incident was initially reported last week. …

“The anti-Semitic graffiti and vandalism were also falsely reported as being done by outside suspects,” Smyth said.

“We found evidence of a crime. It just wasn’t a hate crime,” said Smyth, adding the police expended considerable resources investigating the incident and took it seriously.