Why Are Hard-Working Asians Increasingly Voting for Democrats?

Unlike Mexicans, Asians really do have conservative values of hard work, delayed gratification, scholarship and appreciation of capitalism. Over half of Asians have a bachelor’s degree or higher, while the national rate is 30 percent for a BA.

Asians are the highest-income, best-educated tribe in America as a result of their industriousness. Why are so many Democrats? One example: 71 percent of Asians voted for Obama in 2012.

A rift broke out in public last month when Asians rallied against a revival of affirmative action: Diverse California: Chinese Want to Keep Prop 209’s Ban on Affirmative Action. Scholarly Chinese have benefited from college admissions based on academic achievement, not race set-asides.

So I watched Wednesday’s Fox Business interview with John Ying of the Asian-American Republican Coalition hoping for an answer. 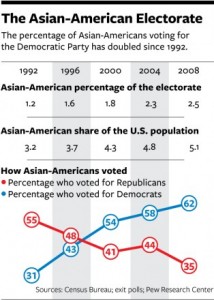 Interviewer Stuart Varney opined the “those core values are trumped by the immigration issue,” and illegal Asians figure they will get a better deal from Democrats.

(The Department of Homeland Security estimates that of the more than 11 million undocumented immigrants in the U.S., 1.3 million are from Asia.)

Ying countered that Asians are not one-issue voters and their values include “education… and merit-driven opportunities.”

My opinion is this: because Asians are not as engaged in the political process as some, they are more affected by the constant media bashing of conservative ideas. Campaigning by GOP needs to be more explanatory because basics principles of capitalism are no longer understood.

As shown by the chart, Asians were Republican-friendly not that long ago. But the right kind of campaign is needed to convince them that their values are not a good fit with socialist Democrats.