Mark Krikorian posted an article illustrating the efficacy of attrition as an enforcement strategy, where negative reinforcement prods border violators to get home the same way they got here — on their own dime.

I’m not one who thinks the taxpayer should be dinged to give lawbreakers a free ride home. “Deport them all” is not on my to-do list because it is another cost for Americans. Considered another way, think how empowering it must be for aliens to leave on their own, sans handcuffs. They should look at the bright side of do-it-yourself deportation. 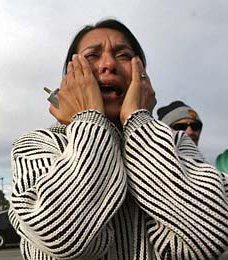 Anyway, the story has all the usual bogus concepts the press repeats nauseatingly — tearful foreigners, families torn apart, aliens living in fear, jobs lost (to which they weren’t entitled in the first place), etc. It’s the same old tired boo hooey, with no mention of who created the messy situation.

(The illustration is a random tearful alien, because the Salt Lake Tribune didn’t include pix of Vickie and Lizzie, who as sensitive offenders fear “repercussions.”)

But another point caught my attention, namely the length of time the lawbreakers can expect to remain (and work) while their case is adjudicated in the court system: four years. Lawbreakers could make tens of thousands of dollars in that time. No wonder it takes dynamite to get evildoers to scram. If deportation didn’t take so long then additional aliens would probably repatriate themselves more rapidly.

“Vickie” says she’s tired of living in fear: the fear of immigration officials, Utah politicians targeting people like her and the bad economy here.

So after 18 years in Utah, working without documents, she says her family will probably return to Mexico.

She bursts into tears as she says it, burying her face in her hands. “My 16-year-old daughter [a U.S. citizen] doesn’t want to go. She was born here, and this is all she knows. She has never been to Mexico. But how could I leave her here alone? She’s too young.”

Another older daughter, “Lizzie,” who has a visa to be here legally, says she may also need to return if her parents go. She is facing a divorce and has two young children. Her extended family provides a home, child care and emotional support, which would disappear. And if she stays without them, she says, “It would tear our family apart.”

Vickie and Lizzie (whom The Salt Lake Tribune agreed not to identify by their real names because they feared repercussions) are examples — and explanations — of a recent trend shown by some studies: More undocumented immigrants may now be going home than are coming to Utah. It is happening at the same time some of the state’s politicians are pushing tougher laws claiming that a record flood of illegal immigration has reached crisis proportions and must be stopped.

An annual study this year by the Pew Hispanic Center, using U.S. census data, estimated that the number of immigrants in Utah illegally dropped by 10,000 between 2008 and 2009 — from 120,000 overall to 110,000. But study authors caution those numbers are within statistical margins of error, so it is possible that no decrease occurred — but numbers suggest illegal immigration is at least slowing to a trickle.

Vickie talks about why her family may join the flow south. Immigration officials started deportation proceedings against her after they found she used a false Social Security number. She was held in jail for 17 days. Her husband was still in detention when she was interviewed. She lost a job because her boss worried her return would bring attention from authorities “and nobody there has papers.” In a tough economy, it’s hard for her to find other work —and as a noncitizen she does not qualify for welfare or unemployment benefits.

Aaron Tarin, her immigration attorney, says if Vickie chose to fight deportation, the lengthy process would allow her and her husband to stay in the country for another four years or so — and gain permission to work legally during that time. While they would probably lose eventually, it could buy time in the hope that changes in the law might help them.

But Vickie says they have had enough. She’s tired of always worrying about immigration officials; frustrated with the tense relations fueled by politicians seeking tougher enforcement; and worried about the bad economy.

That makes her want to go home, even though she says her family will likely face poverty because most jobs in Mexico go to people who are much younger.

Jeffrey Passel, author of the most recent Pew report, said the flow of illegal immigration nationally is down and may have reversed for the first time in two decades probably because the recession has destroyed jobs and because border security has been beefed up in recent years.

On the economic side, University of Utah research economist Pam Perlich says, “Since the job market has gotten really bad, there’s no economic incentive to come.”

The Pew study suggests that those undocumented immigrants who are returning home tend to have come from Central and South America — but Mexicans tend more often to stay here.

“That’s because they have multigenerational systems of support here,” Perlich said. Many undocumented immigrants who are Mexican have relatives here and can stay with them to save money when times are tough.

People from Central and South America tend not to have that system of help, Perlich said, so they are more likely to return home when they cannot find jobs. On the other hand, she said people who emigrated illegally from Africa or Asia tend to stay because the cost of transportation home is so high.

Perlich said a paradox may keep Mexicans from returning home: tougher border controls.
“Increased enforcement has made it more dangerous to move back and forth,” she said. “So many hunker down and stay put here.”

Perlich says those numbers are “far from a flood” of illegal immigration. But a flood or a trickle may be in the eye of the beholder. While the numbers of undocumented immigrants may be declining now, they rose significantly from 1990 to the beginning of the recession.