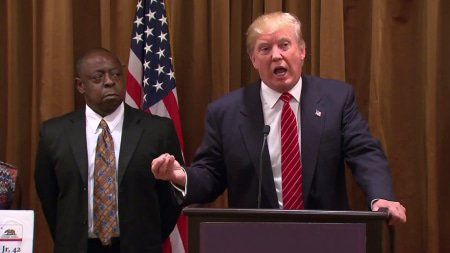 Who's Really "In The Shadows"? Donald Trump Knows...

It's the victims of illegal aliens who are in the shadows!

That's my slightly tweaked version of an idea Frank Jorge formulated while interviewing Robin Hvidston for his weekly internet radio show (i.e. podcast) "Frank and Friends."  You can hear their discussion starting about 29:20 into the July 16 podcast here, and what I think is the highlight transpires between about 31:00 and 34:30.

Frank is a retiree from southern California (as I am) who escaped to Wyoming in 2011, and, naturally, he often focuses his show on aspects of the nation's immigration madness.

Robin, who's stuck it out in southern California, is a long-time leader in the fight against illegal immigration.  As part of that effort, she's the volunteer executive director of We The People Rising, a citizens' activist group based in Claremont, California.  (The group routinely gets in the face of Mexican consuls and Congressional riff-raff like Luis ["Stinky Luis"] Gutierrez [D-IL].)

Robin recounted the press conference Donald Trump had held at the Beverly Wilshire Hotel on Friday, July 10, which she'd attended.  She was also there when Trump spent half an hour before his press conference meeting privately with members of five California families who had lost sons or nephews to illegal-alien-created mayhem, to hear their stories.

Robin emphasized to Frank, "Donald Trump listened to these family members."  Indeed, he must have, for then he had the family members tell their stories of loss at the press conference itself.

Currently, you'll find photos of the private meeting and of the press conference at We the People Rising's home page, in a report dated July 17, 2015.

And here's the press conference, in full:

Trump's attention to these American victims of illegal immigration stands in overwhelming contrast with the brutal indifference of Homeland Security Secretary Jeh Johnson.  Testifying before Congress on July 14, Johnson was asked if the administration had reached out to the Steinle family in the wake of their daughter Kate's murder by a quintuply-deported illegal alien on July 1 in San Francisco.  "To who?" was Johnson's unforgettable reply.

Upon hearing Robin's description of the meeting and press conference, Frank summed up:

[Trump's] the only one that has gone out there to bring the American victims of illegal-alien crime out of the shadows.  Because these people — those who have lost family members to illegal aliens and who are Americans — are truly the ones that have been in the shadows.

It's not the illegal aliens.  The illegal aliens do anything and everything they want to do in plain sight, inclusive of going to our various capitals ... and protesting in broad daylight in front of TV cameras ...

But when it comes to this subject, Robin, of people who have lost their loved ones to these very same illegal aliens ... they've been left completely in the shadows.  They will not be spoken of or to, they will not be featured in the media.  And Donald Trump, to his credit, has brought them out and put them on display before the American people.

I wish I could ad lib as profound a riff as Frank Jorge pulled off there!