"Who Gets Shot in America?"

Robert VerBruggen in Real Clear Policy has a summary of a new Urban Institute report on hospital-reported rates of shootings by race of victim in six states. It’s quite similar to my 2010 study in VDARE of three years of homicides by race of young male victims in Los Angeles

Who Gets Shot in America? By Robert VerBruggen

Embry Howell, Sam Bieler, and Nathaniel Anderson of the Urban Institute have an interesting new paper (PDF) based on hospital data from six states. …

The paper offers a highly valuable account, however, of how gunshot injuries are unevenly distrubuted throughout the population. Here’s one chart, for example, with the numbers for males age 15-34, broken down by race: 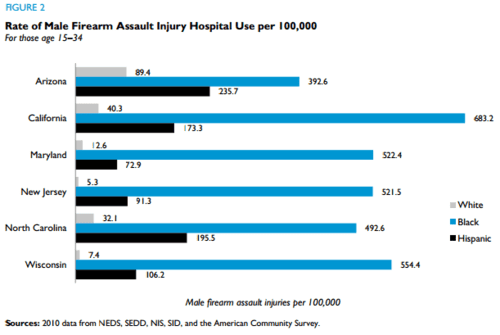 Grey is white, light blue is black, dark blue or black is Hispanic

These are the races of victims of shootings, not the shooters themselves. But, unlike what you might imagine from reading fevered accounts in the prestige press about Ferguson, most young men who get shot get shot by somebody quite a bit like themselves. America is not like it was 50 years ago when most folks were unprepared for the big upsurge in homicide began around 1964. Many people have borne enormous costs over the last half century to separate their sons from the kind of young men who might shoot them.

A reader points out:

Probably worth noting in light of the disparities you’ve pointed out between states in their racial disparity in incarceration rates.

Among other reasons, I speculated that where whites tend to be particularly law-abiding, such as Wisconsin, Minnesota, and Iowa, a higher percentage blacks tend to go into drug-dealing to meet consumer demand that whites aren’t inclined to meet themselves.

New Jersey black men are slightly more likely to shoot each other than their North Carolina cousins, but white men in NJ are just not into guns, the Jersey Shore and the Cosa Nostra be damned. I guess aging Mafiosi don’t show up in this report, though.

Despite what Bruce Springsteen has been telling you for all these years, New Jersey whites tend to be prosperous and orderly.

That reminds me, however, that in the summer of 1980, I took a bus from the lovely Port Authority Bus Terminal on 42nd Street to an exurban part of New Jersey, where I was supposed to be picked up by a friend from Rice U. But I had lost his phone number so I got stranded at the bus stop in the leafy suburb for several hours. There, I got to witness a memorable confrontation in the barely lit parking lot between two rival carloads of what Joe Pesci’s character in My Little Vinny would call “yoots.”

It culminated with one yoot pulling a knife on another yoot. It was very West Side Storyish, but at that point the guys getting shown the knife de-escalated, laid rubber getting out of there, and (presumably) went back to Joey’s mom’s house to watch the last part of Saturday Night Live.

Are juvenile delinquents in New Jersey still into knives?

P.S. I realize now that the name of the movie was My Cousin Vinny. But My Little Vinny sounds promising. I wonder if Joe Pesci could be lured out of retirement on the golf course to do the voice for a Very Special Episode of My Little Pony.