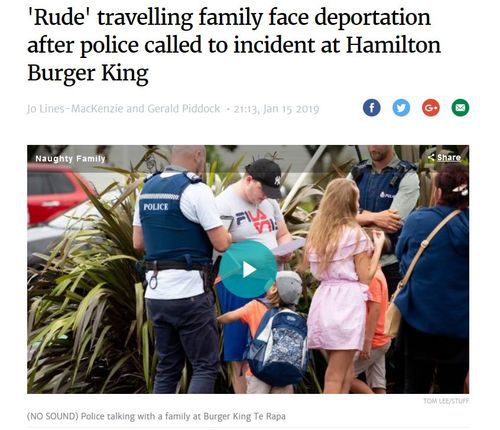 Who Are The "Unruly Tourists" In New Zealand? British Or Irish Traveller?

WELLINGTON, New Zealand — They dumped chips on someone’s beach blanket. They reportedly stole a Christmas tree from a gas station. They were eventually issued deportation notices after the police were called to a disturbance at a Burger King.

An English family touring New Zealand — about 12 people, including children — was so unruly that social media posts documenting their bad behavior were picked up by national news outlets, which sent out alerts about the family’s location and latest reported antics, including refusing to pick up garbage left on the beach and throwing food on the floor at a cafe. …

Three members of the family did not respond to interview requests. But Barbara Doran, one of the tourists, told The Daily Mail that her family had been “tortured” by New Zealanders and had done nothing wrong.

Although the family members had been issued deportation notices by New Zealand immigration officials after an incident at a Burger King in the city of Hamilton, some remained in the country as of Tuesday. (New Zealand permits visitors to appeal deportation notices, and they cannot be deported until their appeals are complete.) One of the family members, Tina Maria Cash, was convicted of theft in the Hamilton District Court and ordered to pay 55 New Zealand dollars for stealing from a gas station.

But are the Unruly English Tourists English English or are they Irish Traveler English?

They seem to tell New Zealand private citizens that they are Irish but tell the New Zealand media that they are English. They have British passports and seem to have last lived in trailer parks in the English Midlands.

Whoever the Unruly Tourists turn out to be, Irish Travelers / Tinkers are pretty interesting: they share a lot of behavioral traits with Gypsies / Roma, but don’t appear to be genetically related. Alternatively, they can be viewed culturally as Extreme Irish. From Wikipedia:

In 2017 a further genetic study using profiles of 50 Irish Travellers, 143 European Roma, 2232 settled Irish, 2039 British and 6255 European or worldwide individuals confirmed ancestral origin within the general Irish population. An estimated time of divergence between the settled population and Travellers was set at a minimum of 8 generations ago, with generations at 30 years, hence 240 years and a maximum of 14 generations or 420 years ago. The best fit was estimated at 360 years ago, giving an approximate date in the 1650s. This date coincides remarkably well with the final destruction of Gaelic society following the 1641 Rebellion and during the Wars of the Three Kingdoms in which Cromwell’s forces devastated the country.

Irish Travellers are not an entirely homogeneous group instead reflecting some of the variation also seen in the settled population. Four distinct genetic clusters were identified in the 2017 study, and these match social groupings within the community.

So, perhaps they are Irish who lost their land in the disasters of the 1600s — the English maintained harmony and property rights within England by telling the winners of the two English civil wars to go over to Ireland, put down the rebels, and take their land.

Their traditional economic niche seems pretty reasonable — they did simple metal work such as knife sharpening that a village needs done only once or twice per year, so they moved around to bring their services to the sedentary population. But having no fixed abode seems to generate cultural problems, such as an irresponsible attitude toward littering and crime.

Or maybe everybody in Ireland used to be as carefree as the Travelers, while the current Irish personality, which tends to the gloomy and anhedonic, is a fairly recent contrivance perhaps in response to the Malthusian catastrophe of 1846.

The population of the 26 counties of the Republic of Ireland is now about 4.8 million. In 1841 it was 6.5 million. Starvation and out-migration played a huge role in reducing the population, but so did the Catholic Church’s cultivating a new Irish personality of restraint.

The most famous Traveler is former heavyweight champ Tyson Fury, who, if boxing were still big, would be the most famous athlete in the world.

Fury, 6’9″, last month fought a spectacular comeback bout with American champ Deontay Wilder. Fury was heading toward an upset on points when …

Fury went down so hard his skull bounced off the canvas, but, somehow, he got up before the count of ten and earned a draw.

After bouts, Fury serenades his fans from the ring with karaoke selections. Here, following his ding-dong draw with Wilder, after absorbing one of the scarier one-two combinations I’ve seen, he’s leading the sporting press in singing “American Pie:”

I kind of like this idea that the Traveler – Gypsy connection is misleading: instead, maybe Travelers are Super Irish. Everything about Tyson Fury seems to be some kind of insane Irish stereotype on steroids:

Tyson Luke Fury was born and raised in Wythenshawe, Manchester, England. At birth, he weighed only 1lb after being born three months premature.[13] His father John named him Tyson after the then-world undisputed heavyweight champion Mike Tyson.[14]

His family is of Irish Traveller heritage.[15] His paternal grandfather was from Tuam, County Galway, which is also the birthplace of his father, John Fury.[16] The Furys of Galway are ultimately of Gaelic origin, deriving their present name from Ó Fiodhabhra.[17] His maternal grandmother is from County Tipperary and his mother was born in Belfast.[18][19]

The Fury family has a long history in boxing;[14] his father competed in the 1980s as “Gypsy” John Fury,[20] initially as a bare-knuckle fighter and unlicensed boxer, and then as a professional boxer.[21]

He is the older cousin of professional heavyweight Hughie Fury.[23] He is also a distant relative of “self-styled King of the Gypsies”[24] Bartley Gorman,[25] hence Fury’s own self-styled nickname, ‘Gypsy King’.[26] He has also styled himself as ‘The Furious One'[27] and ‘2 Fast’ Fury.[28] He is also the distant cousin of professional Nathan Gorman who is also trained by two-weight wolrd champion Ricky Hatton alongside his younger brother Tommy Fury.[29]

Despite strongly identifying with his Irish heritage, Fury has had problems in gaining dual citizenship because, in the 1960s, his father’s birth in County Galway was not recorded civilly, as Irish Travellers at the time only recorded births through baptism with the Church, rather than officially with the state.[30]