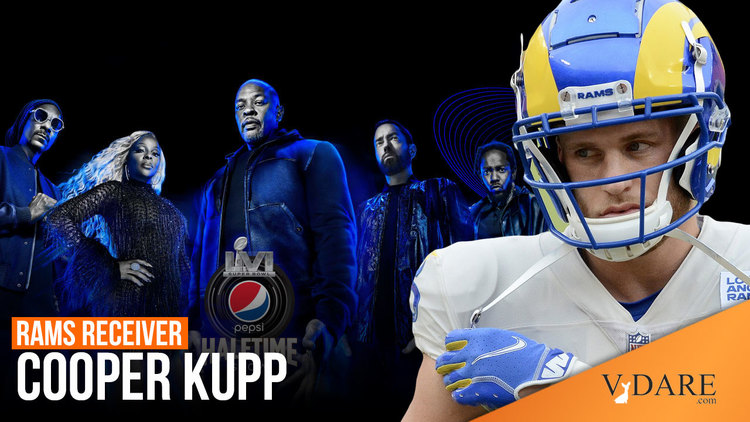 Whites Hang On In The NFL—Blacks Dominate The Commercials

The receiver, Cooper Kupp, actually led the league in catches, touchdowns and receiving yards. If he has a criminal record, I'm not aware of it.

Meanwhile, the abysmal halftime show featured fat, washed-up rappers performing on what appeared to be a recreation of a black L.A. neighborhood, complete with hoopties, men dancing in prison uniforms, and one dancer wrapped in gun holsters.

The one white rapper, Eminem, apparently knelt at some point.

The NFL says it was “aware” that rapper Eminem would kneel during Sunday’s Super Bowl LVI halftime show and did not try to stop him. https://t.co/yA1jNpBzio

Then there were the commercials. I didn't keep count, but almost every one seemed to feature an all-black cast or a part-black cast. One commercial bemoaned the racism of photography, which reveals black people to be...black.

Google is leaving behind its usual search-based #SuperBowl ad style this year to instead focus on how the Pixel's camera helps people of color feel seen. https://t.co/PrvpidNM9j

Combine appeals to black and white, and it looks forced. All the energy is sucked out by worrying about who’s being acknowledged and by how much.

Nobody wins this game.