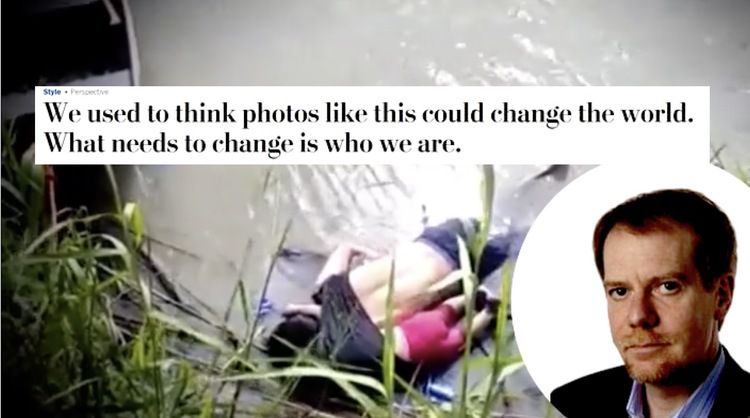 This essay in the Washington Post by its Pulitzer-winning art critic is a good illustration of how the immigration policy conventional wisdom is increasingly motivated by blatant white-on-white hate, with massive degrees of projection about who is Othering whom.

We used to think photos like this could change the world. What needs to change is who we are.

By Philip Kennicott
Art and architecture critic
June 26 at 3:20 PM

… it recalls the vulnerability of Alan Kurdi, a 3-year-old Syrian Kurdish boy whose body washed up on a beach in Turkey in 2015. Nilüfer Demir’s picture of the boy, who seemed to be resting after play, became one of the most searing images of the European refugee and emigration [?] crisis. …

Because these images have already broken through our own resistance to seeing pain and tragedy in the world, we imagine that they must break through the collective conscience as powerful political icons. … As it circulates, we believe it will acquire enough force and familiarity that our political leaders will have to do something different — change policies, reverse course, revise their own understanding of the severity of a problem. …

The metaphor of “breaking through,” however, relies on an understanding of the human conscience that is being sorely tested at the moment, not just in the United States, but in every country where nationalism and nativist populism are creating divisions between us and them, between the rightful “folk” and the supposedly illegal outsider….

But when nationalism has successfully dehumanized the other, there is no breaking through, and people who imagine that a photographic message must assuredly be so powerful that it will touch all hearts are forced to grapple with a more confounding truth: Not all consciences operate alike, not everyone is susceptible to what seems a basic, even rudimentary level of empathy. And so, there is a paradox: We resist the idea of living in an us-vs.-them world only to find that our basic sense of “us” is already fractured. We look out at our fellow humans [i.e., fellow Americans] and can’t honestly understand how their minds work.

… You may look at this photo and think that its deep message is “We are all hoping for a better life and will take extraordinary risks on behalf of those we love.” But someone else will probably say, “People shouldn’t cross borders without permission.” The drowning becomes a kind of punishment, a river stands in for ideas of human authority, and the photograph doesn’t break through anything. It merely reiterates an old and cherished belief: Bad things happen to those who break the rules. … there will be efforts to make it an allegory of law and judgment rather than an opportunity for moral imagination and compassion.

The day after these two people perished in the Rio Grande, the president of the United States dismissed an accusation that he had sexually assaulted a prominent author and columnist in the 1990s. He used a phrase similar to ones he has used in the past to deflect similar allegations: “She’s not my type.” It is a terrible thing to say, with a specifically misogynistic meaning in the context of how men practice violence against women.

But it is a perfect summation of our new and deformed American conscience. It is pithy and dismissive, an invitation to look at people who have been victimized and see only otherness. It shuts down any understanding of trauma before empathy has begun to interrogate how trauma is felt and experienced. It is about looking without seeing, judging without understanding. For anyone who wants an off-ramp to the moral demands made by this image, this could be the universal caption: “They weren’t our type.”

Last April I took a working vacation in Venice, spending my free days hunting down every Tintoretto I could find. This is a record of one of the happiest weeks of my life. https://t.co/252UysAouL