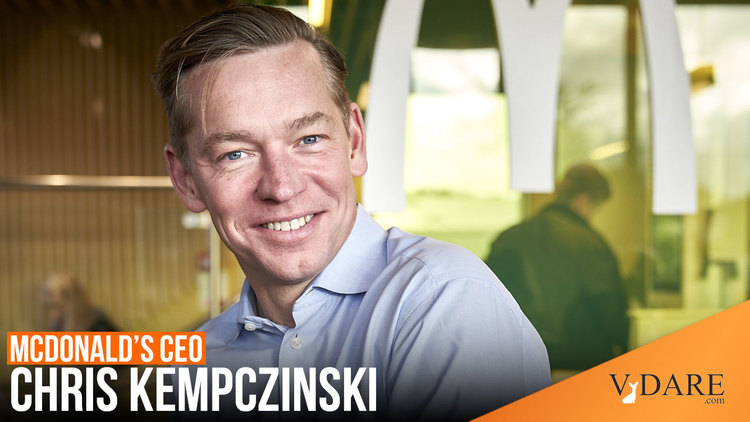 We have now reached a point in America where the white CEO of a company promoting itself as 365Black is “racist” for stating parents have failed their children when the latter are murdered in shootings in Chicago in broad daylight (or in the case of 7-year-old Jaclyn Adams, murdered as more than 50 shots were fired at her as she sat next to her gangbanger dad—with a long criminal record—in the drive-thru of a McDonald's).

McDonald’s head honcho Chris Kempczinski is under fire over a “racist” and “ignorant” text message he sent to Chicago Mayor Lori Lightfoot about shootings in the city.

Critics say the message — sent on April 19 but revealed Tuesday — appeared to blame parents who “failed” their children.

“p.s. tragic shootings in last week, both at our restaurant yesterday and with Adam Toldeo [sic]. With both, the parents failed those kids which I know is something you can’t say. Even harder to fix,” he said, according to WBEZ Chicago, which obtained the text through a Freedom of Information Act request.

The text was sent shortly after Lightfoot had visited the McDonald’s headquarters and appeared to be referring to the deaths of Jaslyn Adams, 7, who was killed the day before the text in her father’s car outside a Chicago area McDonald’s, and Adam Toledo, 13, who was fatally shot by police the month prior.

Activist groups are now reportedly planning a protest Wednesday outside of the McDonald’s headquarters.

The group of 12 organizations, including Fight for $15 and the Chicago Alliance Against Racist and Political Repression, will also publish an open letter addressing the text, according to Insider.

McDonald’s area workers will also walk off the job Wednesday to join the protest, according to WBEZ.

“It’s clear to us you’re the one who has failed here,” reads the open letter, which was viewed by Insider. “Your text message was ignorant, racist and unacceptable coming from anyone, let alone the CEO of McDonald’s, a company that spends big money to market to communities of color and purports to stand with Black lives.”

In June, a similar lawsuit was dismissed by a judge, who said, “The court does not mean to imply that McDonald’s operations over the years have not been tainted by the brush of racism,” but historical discrimination did not justify the lawsuit.

McDonald’s did not immediately return The Post’s request for comment.

However, in a note viewed by Insider, Kempczinski acknowledged that the text was “wrong.”

“In the text exchange, I thanked Mayor Lightfoot for the visit and reflected on our conversation about the recent tragedies, commenting that ‘the parents failed those kids,’” he said.

“When I wrote this, I was thinking through my lens as a parent and reacted viscerally. But I have not walked in the shoes of Adam’s or Jaslyn’s family and so many others who are facing a very different reality.

“Not taking the time to think about this from their viewpoint was wrong, and lacked the empathy and compassion I feel for these families. This is a lesson that I will carry with me.”

He also said McDonald’s remains committed to working with civic and community leaders to bring an end to the recent surge in gun violence in Chicago.

“We’re a Chicago company, born and raised. There is so much about our city to make us proud. That doesn’t negate that there is also much that needs to be addressed to ensure our best days are ahead of us,” he said.

“And I can’t think of a more urgent priority than ensuring these tragedies come to an end.”

The CEO of Walmart dares notice black people have a responsibility in ensuring black lives matter, and he gets called a racist…

For believing parents have a responsibility in raising their children, the white CEO of McDonald’s is a racist (note: his bonus is tied to replacing white senior management with non-whites in the name of honoring George Floyd). Bragging about creating more black millionaires than any other corporation didn’t protect him from being called a racist for merely pointing out reality.

When enough white individuals collectively realize this accusatory word has no meaning or power, the earth will literally shake.