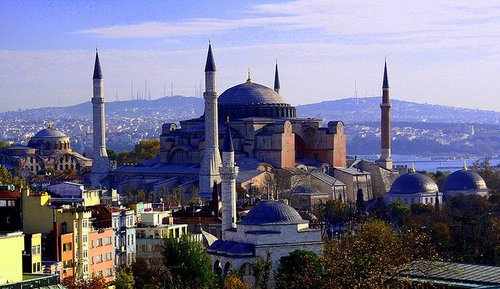 What's Going on in Turkey, Anyway?

Back on January 1, 2014 I published one of my favorite Taki’s columns, The Shadowy Imam of the Poconos, about Turkey’s Gulen Cult:

… For example, the current political shakeup in Turkey turns out to be a mashup of various obsessions and hobbyhorses of mine, such as byzantine conspiracy theories, test prep, the naiveté of American education reform, immigration fraud, the deep state, and even the Chechen Bomb Brothers’ Uncle Ruslan.

This lattice of coincidence begins with Turkey’s prime minister Recip Tayyip Erdo?an, who is presently besieged by graft scandals following police raids on his inner circle.

With Turkey’s traditional ruling class—the secularist Kemalist generals—finally neutralized by the Ergenekon show trial, the Muslim civilian factions now appear to be plotting against each other. It is widely assumed among Turkish conspiracy theorists (i.e., roughly 98% of all Turks) that the prosecutorial assault on the prime minister was at the behest of Erdo?an’s former political ally, Fethullah Gülen, a powerful and mysterious Muslim cult leader holed up since 1999 in, of all places, the Poconos, where he has become America’s largest operator of charter schools.

But things move fast in Turkey. In 2014, Erdogan appears to have made a deal with the defeated Generals (here’s Harvard economist Dani Rodrik’s essay on how the Gulenists tried to frame his Turkish general father-in-law) and struck back against the Gulen Cult. The latest I’ve heard is that the Turkish government this month charged Imam Gulen with plotting a coup and have demanded life in prison for him.

On the other hand, things seem to have calmed down for the Gulenists in America. In 2014, the FBI raided numerous Gulen charter schools to figure out how they were skimming cash for their global operations from American taxpayers. But that FBI investigation has disappeared from the news for unknown reasons.

If I had to bet, I’d guess that the CIA had a sitdown with the FBI and explained that Gulen Cultists embezzling taxpayer dollars from local school budgets is a feature, not a bug, of America’s Global Grand Strategy. The Gulenists are in exile in Saylorsburg, PA in case Turkey ever needs a new government, and then voila we just happen to have a conservative Islamic but pro-American and pro-business government in exile ready to drop in. What’s a few hundred millions per year in skimmed charter school funds compared to controlling the Bosporus?

Or maybe I’m totally wrong about all this. Turkey is opaque to me.

In any case, the Gulen Cult is small potatoes at the moment, as President Erdogan now bestrides the world stage like a colossus, or maybe like somebody who has had one helluva run but whose luck is finally about to run out.

By turning on (and potentially turning off) the outflow of Muslim “refugees” to the E.U., Erdogan has Chancellor Merkel desperately offering Turkey E.U. membership in return for the throttling back the outflow of Syrians and pseudo-Syrians into Europe. This might sound like the definition of Europe jumping from the frying pan into the fire in that the E.U. would grant open borders to 75+ million Turks But it must be a sweet moment for the Islamist Erdogan, who is being asked by Ms. Merkel to help her keep Europe Christian enough that it will elect women rulers like her in the future. Irony …

And then there’s the fighting in Syria. Erdogan has taken this opportunity to pound the Syrian and Iraqi cousins of his domestic enemies, the Turkish Kurds, who denied his party a majority in elections earlier this year.

I really can’t make sense of the new violence in Turkey regarding the Kurds at all.

For years Erdogan had been a force for less violence and better treatment of the Kurds in Turkey. As an Islamist, he was better situated ideologically to work out a friendly deal giving his fellow Muslims, the Turkish Kurds, some kind of federal autonomy within Turkey than had the previous secularist-nationalist governments. Ataturk had wisely forsworn claims to most of the Arab parts of the Ottoman Empire in building a cohesive nationalist Turkish state. Ataturk’s strategy worked pretty well considering the alternatives.

But Ataturk had stubbornly hung onto Kurdish regions by redefining Kurds as “mountain Turks.” As an anti-secularist, Erdogan seemed well situated to work out some kind of win-win federalist deal with the Turkish Kurds.

But the collapse of Syria and the rise of ISIS on the Iraq-Syrian border has brought the Kurds, who had been doing a good job of quietly picking up the Kurdish pieces of failing states like Iraq and Syria, into a more militant pan-Kurdish posture to resist ISIS. This in turn seems to have resurrected Ankara’s nightmare of a united Kurdish state that would detach a big chunk of territory from Turkey.

Recently, a couple of huge bombs went off a Kurdish political demonstration in Ankara. Immediately, the Turkish government blamed the Kurds blowing themselves up to make Turkey look bad.

After a few days, the Turkish government shifted to blaming ISIS. This has proven much more popular with foreign offices since everybody hates ISIS and they really are bad guys. Within Turkey, of course, lots of people believe conspiracy theories about the terrorist bombings being the work of the government. It’s not uncommon in Turkish history for this kind of thing to happen.

But now Erdogan has Istanbul’s ancient enemy, Muscovy, operating militarily in Syria on its Southern border.

Where this will go next, I don’t know.

Like I’ve been saying for a long time, calling somebody a “conspiracy theorist” is not a smear in Turkish culture. In Turkey, pride of place goes to whomever comes up with the most complicated conspiracy theory.