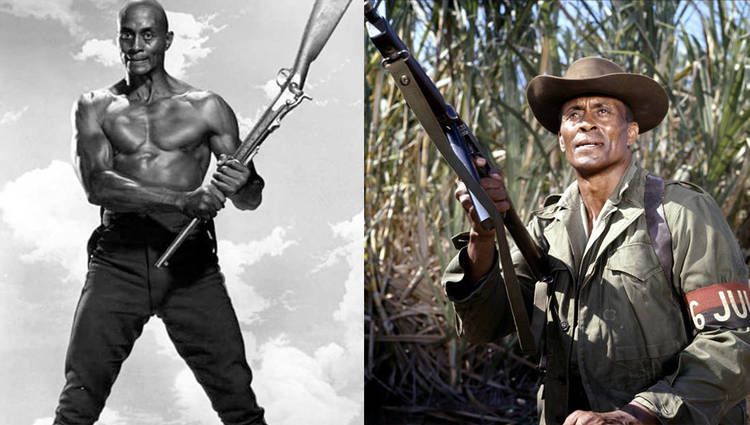 Here’s a question: Why did Hollywood in the Postwar Era constantly hire professional football players for movie and TV roles? For example, countless Los Angeles Rams were cast in various roles, with at least five going on to full time careers as actors after they left the NFL: Woody Strode, (above) Merlin Olsen, Bernie Casey, Fred Dryer, and, perhaps last, Terry Crews.

One reason is clearly that being an NFL player wasn’t very high-paying until recently, while the off-season was longer, and players weren’t expected to spend every moment of it working out.

Another possibility is that the acting demands were less rigorous in Hollywood’s past. Any big galoot might have what it takes to start acting professionally in his 20s or even 30s and quickly become good enough for Hollywood work.

Today, however, top actors like Leonardo DiCaprio typically were working professionally at least by adolescence. I suspect this selects for greater boyishness in today’s stars: DiCaprio first came to wide attention (IIRC) as a 16-year-old credibly playing a 13-year-old in Gilbert Grape. There aren’t a lot of actual 13-year-olds who can carry a major role, so older boys who look younger are cast.

But, yeah, I think today’s stars are more technically skilled at acting than yesterday’s stars.

Meanwhile, LeBron James, who looked 30 when he was 16-years-old, wants to become a big deal in Hollywood (one reason he’s currently with the Los Angeles Lakers, even though it’s easier to get to the NBA finals playing in the Eastern Conference). He’s not bad (he was decently funny playing himself in Amy Schumer’s “Trainwreck”), but most of recent history is against him.