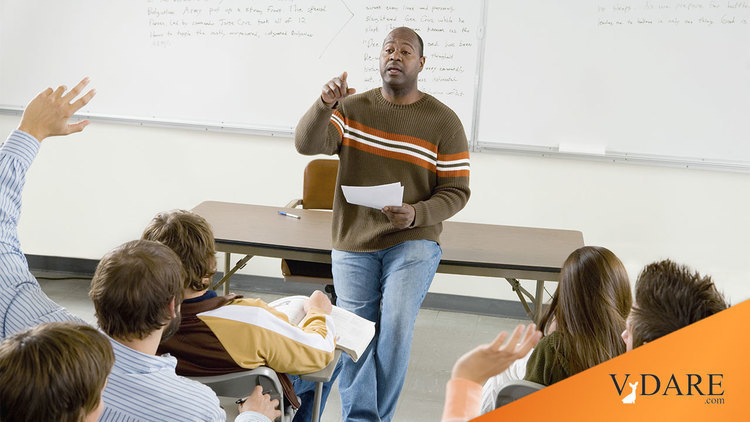 Here's what education wonks don't realize about the "bad teachers" they're complaining about—they're mostly black. For example, Matt Yglesias writes, as pointed out by Steve Sailer below,

"[W]hen Teacher Appreciation Week comes around then of course teachers and their representatives want to emphasize the fact that one of the many things that makes a difference is the quality of teaching. Indeed, evidence suggests that quality of teaching is the most important non-demographic contributor to student learning. Acknowledging that isn't a form of "bashing" or "blaming" teachers, it's identical to celebrating their contributions. But once you accept that quality of teaching matters, then practices like Last In, First Out layoffs and compensation schemes based entirely on seniority and master's degrees don't make sense. Money to pay teachers is a finite resource and it's important to try to allocate it to the best teachers for all the same reasons that good teachers are important in the first place."

But the problem with this is that if they start firing teachers for incompetence, minorities will be hardest hit. The variable that impacts the effectiveness of teaching  isn't the level of education, it's teacher IQ.

Steve Sailer wrote in 2010 that

value-added ratings will have a "Disparate Impact" on black teachers.

Coleman noticed this in his 1966 study of schools: black teachers averaged more years of formal education, but that didn't have any correlations with student achievement. The one thing that did matter, besides students' backgrounds, was the IQ of their teachers. But to avoid hurting black teachers, he left this crucial finding out of the Coleman Report.

David Denby, writing in the New Yorker, said "[M]any of the teachers she fired were black in a predominantly black city."

This led to a political backlash that caused the downfall of the DC Mayor who hired Rhee—see Steve Sailer's post DC Voters: Adrian Fenty: Not Black Enough; Michelle Rhee: Extremely Not Black Enough.