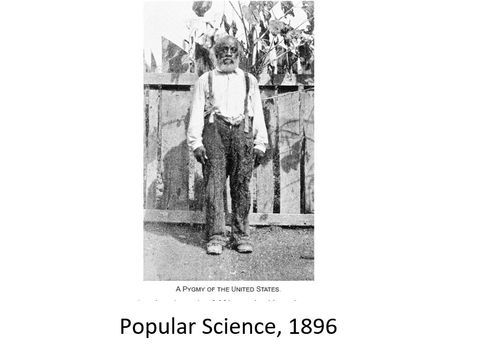 Were There Ever Pygmies in the United States?

How many non-Bantu sub-Saharans, such as Pygmies, ever arrived in the United States?

In May 1896, Popular Science (which was a prestigious magazine back then, printing important works by Charles Sanders Peirce and William James, including the famous “The Moral Equivalent of War“) ran a scholarly article entitled:

THE PYGMY IN THE UNITED STATES.
By JAMES WEIR, Jr., M. D.

It recounts the references to pygmies in classical literature, such as Homer’s reference to the famous story of the battle of the storks and pygmies. There is said to be a picture of a pygmy in Ancient Egyptian art, but there are no mentions of pygmies in the Bible.

While looking over some old papers published in New Orleans in 1842, I found a short description of a batch of, presumably, freshly imported slaves. Among them were “six or eight very small negroes, men and women, all of whom were under five feet in height. Who ran in this cargo is not known, but Mr.—— has the disposal of them.” An old bill of sale, now in the possession of Mr. Wolfgang Werner, of Savannah, dated April 2.’), 1810, gives a description of two adult slaves, male and female, in which the height of the male is declared to be “four feet six inches (4 ft. in.), and the female four feet three inches (4 ft. 3 in.).”

Weir included photos of a 4’9″ black man in Kentucky, who might be a pygmy or he might just be a really short Bantu. How do you tell?

In Weir’s telling, some pygmies in the U.S. escaped to the forests and lived in their traditional manner, hunting and fishing. Weir claims that a few Pygmy communities existed in the forests of the Southern U.S.:

The descendants of these negritos are our American pygmies, who can be found in large numbers either living in colonies like that in the neighborhood of Charleston, S. C, or Bayou Goula, La., or scattered along the South Atlantic and Gulf seaboards. …

He supports himself by hunting and fishing, and never leaves his haunts in morass and forest, unless compelled so to do by lack of ammunition or other necessary supplies. …

These little men make splendid hunters, for they seem to have regained (if they have ever lost, which I greatly doubt) that acuteness of sight, smell, and hearing which makes their prototypes in India the very best of shikaris. There is no animal in all the woods their equal in cunning; there is no fish in any landlocked bayou or swiftly running stream which can avoid their rude but cunningly set nets and traps. … With their return to savagery these pygmies of the United States seem to have lost all desire for the comforts and refinements of civilization.

That seems like a rather happy outcome. That’s pretty much the end of Jack London’s 1903 dog novel The Call of the Wild. I’d hardly be surprised if London read this article.

But is this true?

The only references I can find to pygmies or negritos living near Bayou Goula are citations of Weir’s 1896 article, so I don’t know what to think. Maybe he just made it all up? Or were there really communities of little black people in the woods?

By the way, another possibility is that if little black people really did exist in the United States, perhaps they were not African Pygmies but were instead pygmy Negritos from the Indian and/or Pacific Oceans regions. Weir says:

In the Vindhya Mountains, Malwa, India (20° to 25° north latitude, and 75° to 80° east longitude), M. Rousselet has found the Bandra Loks (“man monkeys”), true pygmies, less than five feet in height. … These little negroes were all five feet or under, and presented all the characteristic marks of the African pygmies, with the single exception of the protuberant abdomen. This modification of form is probably due to their surroundings. Not only are the negritos to be found in India, but they are to be observed in the Andaman Islands, Bay of Bengal; in the Malayan Archipelago; in Melonesia and Polynesia; and in Australia. This race has penetrated as far north as Japan, for Dr. Maget has found true negritos among the Japanese. They are also to be found in the archipelago of Loo Choo and in Formosa.

I haven’t heard of negritos in Japan.

The negritos in Australia’s far north were largely forgotten during the second half of the 20th Century, but they did exist.

The Andamanese probably approximate more nearly in stature and form the pygmies of the United States than do any other tribe of little people save the Akka and Bushmen of Africa. The Tasmanians, however, resemble our negritos very much, as far as facial angle and expression are concerned.

Weir assumed in 1896, not unreasonably, that all the little black men of the world were related:

But while a firm believer in polygenesis, I yet believe that these widely separated tribes of negritos originally sprang from the same root-stock. Their dissemination over such a wide area has been due to one of two causes: either, in times long past, some of them have been carried across the Indian Ocean by storms, or at one time Africa extended across the ocean even as far as Australia. The mighty cataclysm that changed the Sea of Sahara into the Desert of Sahara, by elevating the northern portion of Africa, probably occasioned a corresponding subsidence, and the eastern portion of the continent, save Australia, the Andaman Islands, and the Malayan Archipelago, was covered by the ocean.)

But, last I heard, scholarly opinion was now leaning instead toward convergent evolution toward this phenotype.