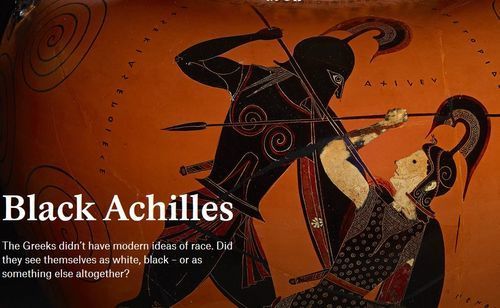 Were the Ancient Greeks Black?

The Greeks didn’t have modern ideas of race. Did they see themselves as white, black – or as something else altogether?

by Tim Whitmarsh
is the A G Leventis Professor of Greek culture at the University of Cambridge, and has held professorial posts at Oxford and Exeter. His latest book is Battling the Gods: Atheism in the Ancient World (2015).

Few issues provoke such controversy as the skin-colour of the ancient Greeks. Last year in an article published in Forbes, the Classics scholar Sarah Bond at the University of Iowa caused a storm by pointing out that many of the Greek statues that seem white to us now were in antiquity painted in colour. This is an uncontroversial position, and demonstrably correct, but Bond received a shower of online abuse for daring to suggest that the reason why some like to think of their Greek statues as marble-white might just have something to do with their politics. This year, it was the turn of BBC’s new television series Troy: Fall of a City (2018-) to attract ire, which cast black actors in the roles of Achilles, Patroclus, Zeus, Aeneas and others (as if using anglophone northern European actors were any less anachronistic).

The idea of the Greeks as paragons of whiteness is deeply rooted in Western society. As Donna Zuckerberg shows in her book Not All Dead White Men (2018),

Actually, La Zuckerberg’s book is scheduled for publication in January 2019.

this agenda has been promoted with gusto by sections of the alt-Right who see themselves as heirs to (a supposed) European warrior masculinity. Racism is emotional, not rational; I don’t want to dignify online armies of anonymous trolls by responding in detail to their assertions. My aim in this essay, rather, is to consider how the Greeks themselves viewed differences in skin colour. The differences are instructive – and, indeed, clearly point up the oddity of the modern, western obsession with classification by pigmentation. …

Okay, but there is more than one kind of pigmentation, which lots of people get confused over.

For example, Greek-American presidential nominee Michael Dukakis had dark hair, dark eyes, and huge dark Groucho Mark-like eyebrows, but nobody in modern America in 1988 called him the first black candidate.

On the other hand, an Englishman in 1900 might have called Dukakis black.

Back in the 1990s, when Afrocentrist theories about who built the pyramids were popular, African-American Afrocentrists on Usenet would often cite old books written by Oxford professors around 1890 that would refer in passing to ancient Egyptians as “black.” This was confusion — the word “black” meant something different to Englishmen in the 1890s than to Americans in the 1990s: practically everybody south of Dover was said to be more or less “black.” Just look at their hair color!

But the Afrocentrists didn’t know that. On the other hand, it seemed pretty enterprising of Afrocentrists to read old books, even if they were misinterpreting them.

Similarly, before American racial culture ideas took over the world, the English would even have talked of “black Irish.”

For example, Anglo-Irish scholar-explorer Sir Richard Burton was dark enough in coloration to pass as an Afghan when he surreptitiously made the hajj to Mecca in 1853.

Much of the confusion stems from the contemporary talking point that race is only skin deep, that black and white only refer to differences in skin pigmentation rather than to deep differences in ancestry and genetics. In fact, the big finding of genetics from the late 1980s Out of Africa theory onward is that the world’s prime racial difference is between sub-Saharan Africans and everybody else.

So the question is not ‘What did Achilles look like?’ but ‘How does Homer portray him?’ We have only one thing to go on here: Achilles is said in the Iliad to have xanthos hair. This word is often translated as ‘blond’, a translation that gives a powerful steer to the modern imagination. But translation can be deceptive. As Maria Michel Sassi’s essay for Aeon makes clear, the Greek colour vocabulary simply doesn’t map directly onto that of modern English. Xanthos could be used for things that we would call ‘brown’, ‘ruddy’, ‘yellow’ or ‘golden’.

Okay, but much the same — ‘brown’, ‘ruddy’, ‘yellow’ or ‘golden’ — could be said of Brad Pitt, who played Achilles in Troy. Pitt is usually summarized as “blond,” but if you Google “Brad Pitt natural hair color” you get a range of looks.

Pitt appears to have been a tow-headed child and a blond little boy, but his high school pictures vary in hair coloration from light brown to reddish brown to dark blond. Perhaps he was dyeing his hair already as a teen or perhaps his hair would go blond in the sun in the summer but would grow out darker in the winter in Missouri.

In 1970 it was the fashion among SoCal adolescents to leave school in June with skin fairer than your brown hair and come back to school in September with skin tanned darker than your now blond hair. (Dermatologists do well these days off people who were adolescents in 1970.)

And what of ‘black-skinned’? Was Odysseus in fact black? Or was he (as Emily Wilson’s acclaimed new translation renders it) ‘tanned’?

Greeks simply didn’t think of the world as starkly divided along racial lines into black and white: that’s a strange aberration of the modern, Western world, a product of many different historical forces, but in particular the transatlantic slave trade and the cruder aspects of 19th-century racial theory. No one in Greece or Rome ever speaks of a white or a black genos (‘descent group’). Greeks certainly noticed different shades of pigmentation (of course), and they differentiated themselves from the darker peoples of Africa and India, sometimes in aggressively dismissive terms that we would now call racist; but they also differentiated themselves from the paler peoples of the North (see Hippocrates’ On Airs, Waters, and Places). Greeks did not, by and large, think of themselves as ‘white’.

That’s because they didn’t get out much from the Mediterranean and Black Sea, where everybody was fairly similar racially because of the ease of transport, except for a small number of blackish people in Egypt from far up the Nile and perhaps a rare visitor from India. The Greeks had no idea of the existence of Amerindians, Australians, or Polynesians, and not much awareness of East Asians. In contrast, after 1492, ocean-spanning European voyagers quickly found that there were major sharp divides among the world’s peoples, caused by oceans, deserts, and massive mountain ranges.

We might add that modern geneticists too find classification by skin colour unhelpful, and indeed avoid the term ‘race’ (a meaningless category in biological terms). There is relatively little genetic difference between the human populations of different continents, and levels of skin pigmentation are a very poor proxy for general genetic relatedness. The distinction between ‘black’ African and ‘white’ European peoples, then, is not just unGreek: it’s also unbiological.

Sounds like somebody hasn’t been paying attention to DNA science since Bill Clinton’s 2000 Rose Garden speech on how cataloging one genome somehow proved that race didn’t exist.