"Wendy Sample", Nisha Agarwal, And The Face Of Immigrant ID In New York

This, from the NYT story referenced below, is the imaginary face on the new ID cards for illegal immigrants in Bill DeBlasio's New York: 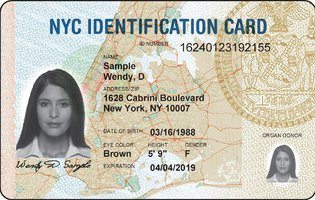 You'll notice that the face is a charming young white woman (the name "Sample" is Anglo-Norman) who has elected to be an organ donor.

Below are some of the real people getting the ID cards:

They will probably not elect to be organ donors—minorities mostly don't. I say it's lack of civic engagement, they say it's paranoia.

And this is Nisha Agarwal, [Email her | Twitter] New York's Commissioner of Immigrant Affairs, in charge of giving out the ID cards, the purpose of which is to help give illegals the rights and benefits of citizens.

Agarwal is the child of legal immigrants from India, and she's also a "public interest lawyer" with a chip on her shoulder:

Agarwal, who has a passion for social justice, said she’s also planning to have her own advocacy agenda — and spoke alongside activists and religious leaders last week at a Foley Square immigrant rights rally.

Her interest in fighting injustice was sparked early — and shaped by her relatives, said Agarwal, whose grandfather marched with Mahatma Gandhi.

When neighbors put up a new swing set but wouldn’t allow everyone to play on it, a young Agarwal was furious.

“That was my earliest memory of injustice, I thought it was terrible. But my response at the time was just to sort of throw rocks and to get really angry,” she said.

“My parents sat me down and said, ‘First of all, maybe you shouldn’t do that. We appreciate your instinct to fight injustice but throwing rocks is not the way to do it. Let us tell you about this man, who is from the country that we come from, who is Gandhi, and he believes in nonviolence.'”

“I think from the earliest stages of my life through my parents and other role models I have had this sense of wanting to do social justice work,” she said