Parts of San Francisco were awash in a sea of Red China flags Wednesday, as friends of the Peoples' Republic showed up in force to celebrate the homeland's rise to power on the occasion of the Olympic torch run. The vibe toward dissenters was not friendly.

[Kai] Sang, a Tibetan from Minnesota, who had done nothing more than stand with a friend wearing a "Free Tibet" shirt, was surrounded by critics. A woman shouted at her, "You know nothing!" and "Go to Tibet to see for yourself."

"They put pressure on us," said Sang, who looked like a soccer mom. "They try to get us to push them, but we are nonviolent. We are not against the Olympics. They should hold the Olympics. But we are speaking for people who do not have a voice."

At that moment, the China supporters seemed to think that they'd carried the day. The "Free Tibet" crowd had been harassed to the point that they packed up and walked toward the Ferry Building. It appeared that the torch would be coming down the street any minute, and the news photos and video would feature thousands and thousands of cheering China supporters waving red flags.

A cocky young man walked past me and read his sign out loud, "Welcome to Beijing," he said. [Pro-China crowds attempt to stifle dissenters, San Francisco Chronicle, April 10, 2008]

Below, only one American flag, among a sea of red, indicated the location of the Olympic torch event. 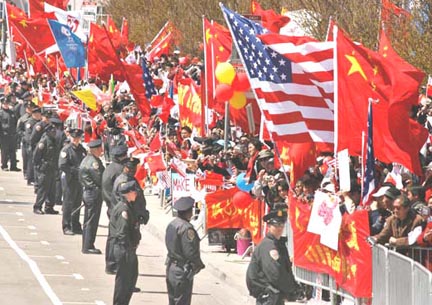 There are literally thousands of comments about the event in various articles and coverage in the Chronicle's online home, SFGate.com. Quite a few are pro-China propaganda, written in poor English. I read a couple hundred, and not a one mentioned the lebensraum aspect of China's takeover of Tibet: in Lhasa, the capital city, the majority of the population is Han Chinese.

What you do read is a lot of adoration for the Chinese homeland from people who immigrated to the United States of their own volition. There is very little resembling loyalty or gratitude toward their adopted country to be found in the online comments. These "Chinese abroad" are a potential fifth column, and some in sensitive positions have already taken that step by spying for Red China, like the recently sentenced Chi Mak and other PRC loyalists.

See Friendly Appeasement: Chinese-American ”Committee Of 100” Seeks Accommodation with Beijing for more about the "global Chinese" — with emphasis on "Chinese."

Someone should tell these immigrants that the majority of the American people still expect old-fashioned cultural assimilation, including loyalty.