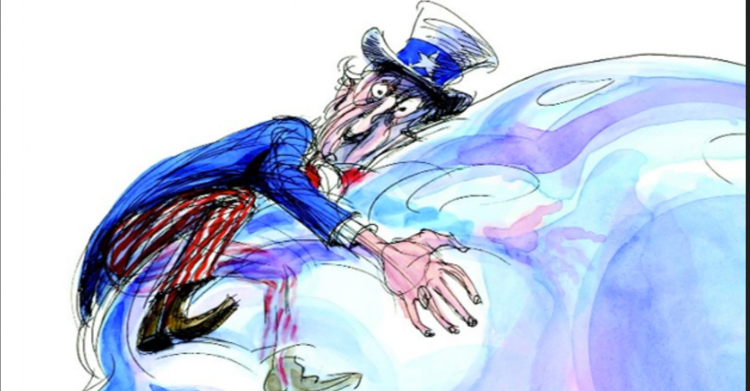 Matt Taibbi has a Rolling Stone article on Goldman Sachs:

After the oil bubble collapsed last fall, there was no new bubble to keep things humming – this time, the money seems to be really gone, like worldwide-depression gone. So the financial safari has moved elsewhere, and the big game in the hunt has become the only remaining pool of dumb, unguarded capital left to feed upon: taxpayer money. Here, in the biggest bailout in history, is where Goldman Sachs really started to flex its muscle. ...

The collective message of all of this – the AIG bailout, the swift approval for its bank-holding conversion, the TARP funds – is that when it comes to Goldman Sachs, there isn't a free market at all. The government might let other players on the market die, but it simply will not allow Goldman to fail under any circumstances. Its edge in the market has suddenly become an open declaration of supreme privilege. "In the past it was an implicit advantage," says Simon Johnson, an economics professor at MIT and former official at the International Monetary Fund, who compares the bailout to the crony capitalism he has seen in Third World countries. "Now it's more of an explicit advantage." ...Fast-forward to today. It's early June in Washington, D.C. Barack Obama, a popular young politician whose leading private campaign donor was an investment bank called Goldman Sachs – its employees paid some $981,000 to his campaign – sits in the White House. Having seamlessly navigated the political minefield of the bailout era, Goldman is once again back to its old business, scouting out loopholes in a new government-created market with the aid of a new set of alumni occupying key government jobs.

Gone are Hank Paulson and Neel Kashkari; in their place are Treasury chief of staff Mark Patterson and CFTC chief Gary Gensler, both former Goldmanites. (Gensler was the firm's co-head of finance.) And instead of credit derivatives or oil futures or mortgage-backed CDOs, the new game in town, the next bubble, is in carbon credits – a booming trillion- dollar market that barely even exists yet, but will if the Democratic Party that it gave $4,452,585 to in the last election manages to push into existence a groundbreaking new commodities bubble, disguised as an "environmental plan," called cap-and-trade. The new carbon-credit market is a virtual repeat of the commodities-market casino that's been kind to Goldman, except it has one delicious new wrinkle: If the plan goes forward as expected, the rise in prices will be government-mandated. Goldman won't even have to rig the game. It will be rigged in advance.

Meanwhile, Barry Ritholtz has a scanned copy of Michael Lewis's Vanity Fair article on AIG's Financial Products division, The Man who Crashed the World. (By the way, Barry, we haven't heard from you lately and we miss you around here. C'mon back)

The basic story is one of predatory securitizing. It took Cassano over a year to realize that the mortgage-backed securities he was insuring had shifted in composition between 2003 and 2005 from only slightly subprime to heavily subprime.

[AIG executive Gene Park] suspected Joe Cassano didn't understand what he had done, but even so Park was shocked by the magnitude of the misunderstanding: these piles of consumer loans were now 95 percent U.S. subprime mortgages. Park then conducted a little survey, asking the people around A.I.G. F.P. most directly involved in insuring them how much subprime was in them. He asked Gary Gorton, a Yale professor who had helped build the model Cassano used to price the credit-default swaps. Gorton guessed that the piles were no more than 10 percent subprime. he asked a risk analyst in London, who guessed 20 percent. ...

Still, Cassano agreed to meet with all the big Wall Street firms and discuss the logic of their deals ... Cassano set out on a series of meetings with Morgan Stanley, Goldman Sachs, and the rest — all of whom argued unlikely it was for housing prices to fall all at once [across the country.] "They all said the same thing" ... (The lone exception, he said, was Goldman Sachs. ... who said: Between you and me, you're right. These things are going to blow up.) The A.I.G. F.P. executives present were shocked by how little actual thought or analysis seemed to underpin the subprime-mortgage machine: it was simply a bet that U.S. home prices would never fall.

But how did this logic about the reliability of MBSs ever make sense even in the abstract? As it turned out, housing prices didn't go down in large parts of the country, at least not until after the Crash. Before that, they only fell in parts of the country where they had gone up the most, i.e., California. (Also, Greater Detroit, but who cares if a house drops from $65k to $12k? It never amounted to much in the first place.) But California by itself was enough, due to high home prices, to crash the national economy. Add in Florida, Arizona, and Nevada, and there goes the world. So, who cares if home prices are stable in Dallas and Charlotte if they are plummeting in San Bernardino, Las Vegas, Phoenix, and Miami?

Greed is the whole point of Wall Street, but the big question is: Where was Fear? The Greed was based on the increasing Quantity of the population, which should drive up demand for homes, but Fear over the Quality of the population of new home buyers was simply not part of the mental universe of sophisticates.

Cassano finally admitted this was nuts in 2006, but he didn't try to get out of previous bets on subprimes, he just stopped taking new ones. But, after AIG got out of the game, the investment banks turned out to be willing to hold subprime MBSs unhedged:

The big Wall Street firms solved the problem by taking the risk themselves. The hundreds of billions of dollars in subprime losses suffered by Merrill Lynch, Morgan Stanley, Lehman Brothers, Bear Stearns, and the others were hundreds of billions in losses that might otherwise have been suffered by AIG F.P. Unwilling to take the risk of subprime mortgage bonds in 2004 and 2005 [or, less willing than AIG was], the Wall Street firms swallowed the risk in 2006 and 2007. ... A.I.G. F.P. wasn't an aberration; what happened at A.I.G. F.P. could have happened anywhere on Wall Street ... and did.

When the world finally woke up in the summer of 2007,

The subsequent race by big Wall street banks to obtain billions in collater from A.I.G. was an upmarket version of a run on the bank. Goldman Sachs was the first to the door, with shockingly low prices for subprime-mortgage bonds ... A.I.G. couldn't afford to pay Goldman off in March 2008, but that was O.K. The U.S. Treasury, led by the former head of Goldman Sachs, Hank Paulson, agreed to make good on A.I.G.'s gambling debts. One hundred cents on the dollar.