We Love the Smell of Victory

It was a great success! A big one, with a vote of 53-46 against cloture (see how individual Senators voted). Roy Beck sent around an email that said "This is one of the biggest victories I've ever seen for grassroots activism."

Absolutely. The whole thing switched overnight. As noted in a 6/27 New York Times article (Doubts Emerge About Passage of Immigration Bill), the vote was too close to call just yesterday. Bush and other ruling elites were twisting arms and handing out pork to convince Senators to get in line. It was only the impassioned voice of the American people that made the crucial difference, insisting that a terrible bill was not acceptable. Sen. Jeff Sessions said this morning just before the vote that the Senate phone system had closed down because of the huge number of calls.

Senator Jim DeMint was a leader against the amnesty bill and issued a statement, "The American People Won Today".

"When the U.S. Senate brought the Amnesty bill back up this week, they declared war on the American people. This act created a crisis of confidence in their government. Thankfully, the American people won today," said Senator DeMint. "This is remarkable because it shows that Americans are engaged and they care deeply about their country. They care enough for their country to get mad and to fight for it, and that's the most important thing of all. Americans made phone calls and sent letters, and convinced the Senate to stop this bill." [...]

"There is a better way forward without this bill. The President has said that the border security measures can be implemented over the next 18 months, and they can be done under current law. Now the Administration needs to prove it and stop holding border security hostage for amnesty." 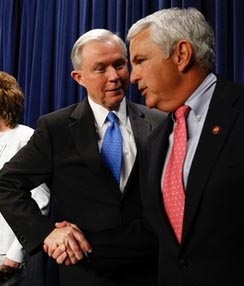 Incidentally, Senator Sessions was magnanimous in victory, suggesting a way that the President could still recoup some legacy chips:

I am pleased to work with President Bush as we move forward with a renewed focus on making our borders secure. It would be an enduring legacy for him if he were to be the first President in nearly 40 years to truly secure our nation’s borders. [ Sessions: Senate Vote on Immigration a Victory for the American People 6/28/07]

We can be sure the open-border hacks will be back with piecemeal amnesty. Sen Feinstein has already promised to bring up Ag-Jobs next month. But for now, do the happy dance, enjoy a cold one and smell the roses. Hooray!