Shame on the Washington Post for whipping up fear among Muslims who reside in America. It has a front-page shriek-fest today, aimed at blaming Americans. The layout portrays Muslims as poor little victims, suffering from the cruelty of meanie citizens – which is a Big Lie. 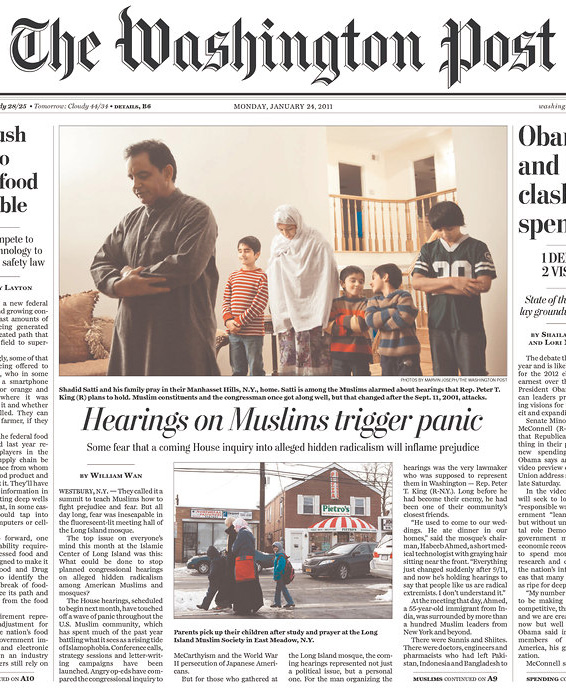 You would think there was no problem with so-called home-grown terrorism from Muslim immigrants. In 2009, the Senate Homeland Security Committee considered the topic in a hearing titled ”Violent Islamist Extremism: al-Shabaab Recruitment in America.” Although the hearing wasn’t exactly hard hitting, but it did broach the subject. I was hoping for sterner stuff from Rep. Peter King as the new chairman of the House committee, but he has apparently succumbed to political pressures. National Geographic showed its documentary Inside 9/11: War on America yesterday, and the film is a good reminder that Muslims were plotting to murder thousands of Americans in seditious mosques while living in our neighborhoods. Not every Muslim immigrant is a murderous jihadist, but their communities are the ocean in which the killers swim. Why continue to welcome Muslims as immigrants? Is Islamic diversity worth a nuked American city sometime in the future?

Anyway, the Post is now vying with the New York Times for position as top dhimmi publication, fawning in weakness toward hostile Islam. What do Muslims fear? So-called hate crimes against Muslims are a tiny fraction of those committed, according to the most recent FBI report. McClatchy’s headline was Hate crimes against Muslims rare, FBI data shows, indicating the whole Islamophobia hysteria is nonexistent, a media creation of CAIR and other fifth-column friends of jihad. And if there were a genuine ”panic” among Muslims residing in the United States concerning ”Islamophobia,” they would be packing up to leave for the welcoming ummah lands. Wouldn’t they? (You can contact the Post ombudsman at ombudsman@washpost.com.)

Hearings on Muslims trigger panic, Washington Post, January 24, 2011 WESTBURY, N.Y. — They called it a summit to teach Muslims how to fight prejudice and fear. But all day long, fear was inescapable in the fluorescent-lit meeting hall of the Long Island mosque. The top issue on everyone’s mind this month at the Islamic Center of Long Island was this: What could be done to stop planned congressional hearings on alleged hidden radicalism among American Muslims and mosques? The House hearings, scheduled to begin next month, have touched off a wave of panic throughout the U.S. Muslim community, which has spent much of the past year battling what it sees as a rising tide of Islamophobia. Conference calls, strategy sessions and letter-writing campaigns have been launched. Angry op-eds have compared the congressional inquiry to McCarthyism and the World War II persecution of Japanese Americans.

Ahem. The past year (or two) has seen a rising tide of Islamic terrorist attacks against Americans: the Fort Hood mass murder, the would-be Dallas bomber, the would-be Brooklyn subway bomber, the would-be Times Square bomber, and the would-be Portland bomber spring to mind. And honor killings in Arizona and New York. The American people do not believe the myth of ”Islamophobia” in the face of overwhelming evidence of Islamic plots against us. It’s not a phobia when they really are trying to kill citizens.