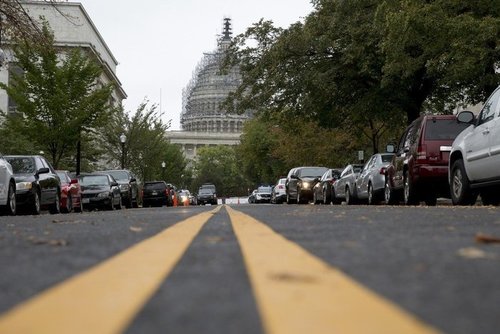 The Washington Post proves again that the more things change, the more they stay the same.

The capital's paper of record gave readers a story about teens and robberies on Capitol Hill, but doesn't say what the suspects look like. Readers learn that "[d]escriptions of the assailants in each case were scanty but similar."

We can guess, however, that the "teens" are blacks because news organizations routinely leave race out of stories about crime.

A woman was robbed in the heart of Capitol Hill on Sunday afternoon by youths who grabbed her around the neck and took her purse, D.C. police said.

A second woman was robbed after dark within a block of where the first incident took place, police said, and a similar robbery was reported Friday about a half-mile away.

In the first incident, the woman was grabbed about 1 p.m. while on foot near Seventh and A streets NE. According to police, several male teenagers took part in the robbery and fled in a minivan.

About 8 p.m., a woman who was walking was robbed by several teenagers who snatched her purse.

They, too, fled in a minivan, police said.

Descriptions of the assailants in each case were scanty but similar. Both incidents occurred about three-quarters of a mile east of the Capitol, in a neighborhood largely composed of rowhouses. A church also stands at Seventh and A.

In the robbery Friday, a woman was walking on 12th Street SE, near Independence Avenue and a block south of Lincoln Park, about 9:30 p.m. when four teenagers approached, police said.

One grabbed her from behind and the others took her purse.

A robbery by force was reported about 1 p.m. Thursday in the 1300 block of E Street NE, within a mile of the sites of the other three reported robberies. Police said a juvenile was arrested. [Three women robbed in Capitol Hill area by groups of teens, police say, By Martin Weil October 18, 2015]

Perhaps the Post ombudsman can explain how this story helps readers, or will help readers identify suspects for police.

Then again, the average Capitol Hill staffer knows, party and ideology and even race regardless, what kind of "teens" they need to watch out for in D.C.

As for commenters on the story, the Post's "scanty" description doesn't fool them. They are assuming the "teens" are blacks, and they know why the Post won't say.