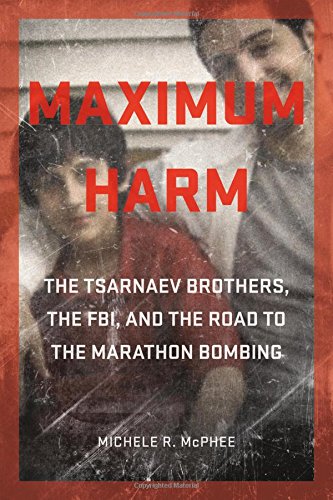 [Michele] McPhee, an Emmy-award nominated reporter with the ABC News investigative team, writes that he felt ‘double crossed’ and that he turned on America for failing to keep up its side of the bargain after he worked for them.

In Maximum Harm, McPhee says that as a result the federal government played a ‘direct role in creating the monster that Tamerlan Tsarnaev became’.

She argues that they recruited Tamerlan as an operative in late 2010 and that he was the ‘perfect candidate’ because he was ‘broke, desperate for citizenship and with a new wife and a baby to take care of, he spoke fluent English, Russian and a dialect of Chechen’.

Tamerlan was not jailed for his involvement in a triple murder in 2011 because he was ‘too valuable as an asset working for the federal government on a drug case with ties to overseas terrorism’.

Tamerlan was also providing them with intelligence on the mosque he attended and its ties to Al Qaeda.

Another issue was where Tamerlan got his money from. On Tamerlan’s death certificate the Medical Examiner listed ‘Never Worked’ as his occupation but he drove a Mercedes. …

McPhee told DailyMail.com that she believed that the CIA were running Tamerlan while he was in Russia and that the FBI were in charge of him when he returned to America, citing sources she had spoken to. …

McPhee writes: ‘Surely to stop Tamerlan at the airport for additional screening based on his physical profile alone – he was a dark-skinned Muslim male with a long beard – or because he was leaving a terrorist hotbed would have been insensitive racial profiling.

‘But the idea that a man whose name was on two terrorist watch lists somehow managed to clear customs because government officials claimed his name was misspelled on those lists is inconceivable.

Well, never attribute to malice etc. The reporter admits she doesn’t have proof.

But the whole Tsarnaev story has always been insanely screwy.

To get something this messed up, it helps to have the government involved. The more outrageous the atrocity, the more likely that agents provocateur and deep state officials have embarrassing ties.

And then there’s the unmentioned question of how in the world Tamerlan’s buddy Ibragim Todashev, a suspect in the Waltham triple ritual homicide on the tenth anniversary of 9/11, got refugee status or asylum or whatever, when his father back home in Russia was only a few steps down the org chart from Vlad Putin and Ramzan Kadyrov. Todashev got gunned down by the FBI halfway through writing up his confession (according to the FBI).

Maybe Tamerlan saw himself as a triple agent working for Putin and the CIA and the Chechen Islamist rebels?

Maybe it was all Chuck Barris-like bluster to impress dumb girls and drug-induced paranoia?

But this kind of stuff does get confusing. It’s like a John le Carré “wilderness of mirrors” spy novel, if everybody involved had been punched in the head a lot.

By the way, the Washington Post has gone back in to the back issues to update their 2013 story to read that the Tsarnaevs weren’t refugees (since we all know that only idiots like Trump worry about refugees), they were asylees.