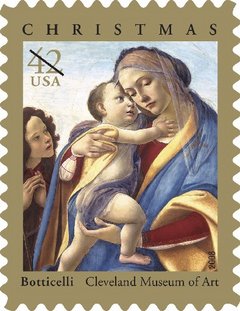 [See Also: War on Christmas Comes to Early to Salon-But They Hate Christians All Year by James Fulford]

No religious stamps for Christmas this year.

Don’t expect new Christmas stamps this year because for the first time in decades the U.S. Postal Service won’t issue a new stamp depicting any Christian religious figure or symbol. No baby Jesus. No Mary. And none of the three wise men.

This isn't the first time it has happened, though it is rare. And it is increasing.

In 45 of the last 50 years, the postal service has printed new images for each Christmas season, including Mary, angels, wise men, Nativity scenes, the Star of David and even Santa Claus. But this year, all of them have been banished from the production presses.

As the article notes, it's not just all Christian holidays that have been banished, but all religious holidays. But you'll still have "geometric snowflakes."

One of the most trite ways of describing diversity is to call it "vibrant." The very word is now a synonym for crime and urban blight among many conservatives, through the Main Stream Media still hasn't caught on to the ironic joke.

But the real effect of diversity is to leave trite consumerism as the only "culture" left standing. At first, you try to incorporate different religious traditions into the larger community. That falls apart when people start using Flying Spaghetti Monster and Satanic Temple style trolling operations to force religion entirely out of the public sphere. So eventually, so as not to deal with it, you don't have anything.

A real culture requires a common mythos that has deep meaning to everyone in the community, even those who don't share the specific religious beliefs. The Pilgrim Fathers didn't like Catholics very much, but it would be absurd for some Italian-American to get offended over a celebration of the Mayflower. Yet we are supposed to be deeply concerned about those who are offended by an acknowledgment of the religious importance of Christmas.

Such is life in a multicultural democracy. Have a vibrant winter festival everyone.