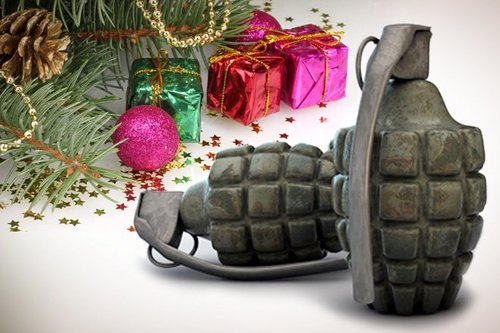 Salon wages war on Christmas in May http://t.co/r8KpGXQ7h4

In a post in January, 2013, I noted something similar. I wrote that Salon Magazine, which has been at the heart of the War On Christmas Denial movement (see here and here ) had just come out of the closet with this:

The point is that Salon, while insisting that Fox News has totally made up the assault on Christmas, was always ready to assault Christianity at any time of year. The story makes it explicit that in Red State America, Christophobes are more militant because they’re a minority, where as in New York and New Jersey, they rule.

And as for "militant", the image at the top of this post, of grenades under the Christmas tree, was the what Salon was using to illustrate their anti-Christmas article—imagery much more violent than what Sarah Palin was attacked for after Tucson.

Anyhow, the reason Salon is attacking Christmas in May, while sneering at Fox for defending it in August, is that for Salon, hatred of Christians is year round.