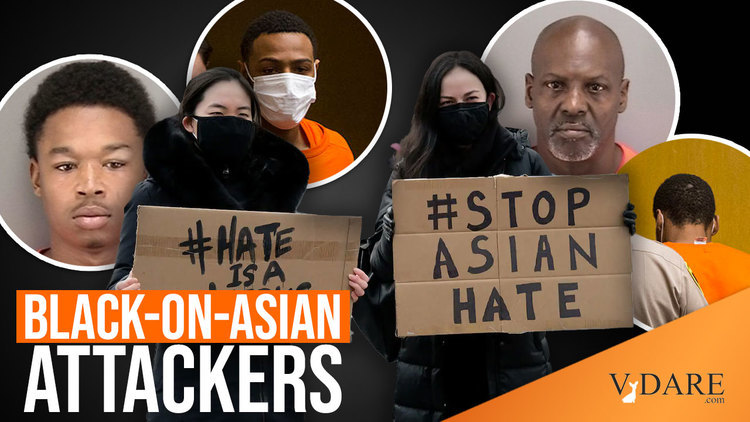 WaPo: Why South Asians Should Horn In On Violence Against East Asians

Many elderly East Asian immigrants live in urban Chinatowns, which has made them vulnerable to random attacks from black madmen and street thugs rendered exuberant by the media-declared Racial Reckoning. In contrast, South Asians try to live in American suburbs far from urban underclass blacks. But that’s not going to stop South Asian academics from claiming to be the Real Victims here.

Violence and prejudice against Asian Americans have increased markedly in recent months. While the United States has a long history of bigotry against immigrants of color going back to the late 19th century, the growing hostility toward people of Asian origin in the wake of the devastating coronavirus pandemic casts a new spotlight on the discrimination many Asian immigrant populations experience in the United States.

Much of the recent media attention has focused — rightly, in our view — on Americans of East Asian descent. But to what extent are immigrants of South Asian heritage also victims of bias and discrimination?

As you’ll recall, Trump referred to the “China Virus” a year ago, which explains why black Democratic criminals during the Racial Reckoning keep beating up East Asians living in downtown Chinatowns. In contrast, nobody has been either criticizing or punching South Asians, but that’s just the point, we South Asians are victims of racist erasure.

To shed light on this question, we carried out an original survey of Indian Americans, who make up the second-largest immigrant community in the United States.

The results reveal widespread perceptions of discrimination against Indian Americans on multiple grounds.

In the mid-1980s, Indian and other South Asian immigrants were subjected to abuse and violent attacks in the New York-New Jersey region by such groups as the “Dotbusters.” These attacks culminated in the brutal 1987 murder of a Citibank executive.

That was a mere 34 years ago, practically yesterday.

The apathy demonstrated by public authorities in prosecuting and preventing such crimes led to the emergence of activist groups dedicated to fostering greater awareness of civil rights within the community.

In the aftermath of the Sept. 11, 2001, terrorist attacks, several Indian Americans were victims of violent hate crimes and xenophobic rhetoric, with the Sikh community targeted in particular. But just how much discrimination do Indian Americans face today?

The survey shows Indian Americans feel the effects of discrimination

What would persuade South Asians to get vaccinated against covid-19?

We find that 31 percent of Indian Americans believe that discrimination against people of Indian origin is a major problem in the United States — while 53 percent think it’s a minor problem. [While 16% thinks it’s a pathetically small problem.]

Measuring respondents’ lived experiences with discrimination reveals that 1 in 2 Indian Americans reports being subjected to some form of discrimination over the previous 12 months.

But these headline findings mask marked religious differences in the data. Among Muslim respondents in this survey, nearly 65 percent reported discrimination. Furthermore, while we observed no significant differences by gender overall, nearly 70 percent of Indian American Muslim women report experiences with discrimination. This finding reveals that the intersecting identities of being a woman, Muslim and Indian in America exacerbate experiences with prejudice.

Muslim women find that Americans want then to be more self-assertive.

In addition, those who identify as supporters of the Democratic Party report a greater degree of discrimination relative to those who identify as supporters of the Republican Party. This reveals a possible link between Indian Americans’ lived experiences with discrimination and their partisan preferences in the United States. Indeed, Indian American voters lean Democratic — and when a 2020 voter attitudes survey asked about their reasons for this preference, the Republican Party’s intolerance of minorities was the most frequently cited reason.

One might expect that foreign-born respondents perhaps face greater discrimination because of their accents or how they dress. But one interpretation of our results is that foreign-born immigrants are simply less likely to report instances of discrimination. The higher frequency of reporting discrimination among U.S.-born Indian Americans could stem from a host of reasons, such as a difference in social norms provoking a greater awareness of discriminatory practices, less fear of retaliation — or an increased demand for equality.

At a time when Asian minorities are under attack — and Indian Americans are experiencing wrenching losses at a distance during India’s covid-19 crisis — the community’s increased awareness of discrimination may lead to new forms of advocacy both for those of Indian origin and many others facing similar predicaments.

Don’t miss any of TMC’s smart analysis! Sign up here for our newsletter.

Sumitra Badrinathan (@KhariBiskut) is a postdoctoral research fellow at the University of Oxford.

Jonathan Kay (@_JonathanKay) is a James C. Gaither junior fellow in the South Asia Program at the Carnegie Endowment for International Peace.

Milan Vaishnav (@MilanV) is a senior fellow and director of the South Asia program at the Carnegie Endowment for International Peace.