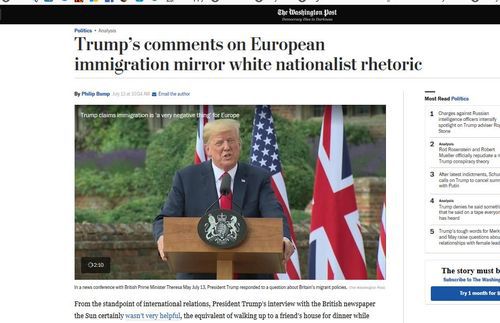 The Establishment Media is both outraged and so far rather stumped by the President’s comment that Europe being inundated by immigration is “sad.” Here’s an early, scattershot attempt at firing back from the Washington Post:

Philip Bump is a correspondent for The Washington Post based in New York. Before joining The Post in 2014, he led politics coverage for the Atlantic Wire.

… “Allowing the immigration to take place in Europe is a shame,” Trump said. “I think it changed the fabric of Europe and, unless you act very quickly, it’s never going to be what it was and I don’t mean that in a positive way.

“So I think allowing millions and millions of people to come into Europe is very, very sad,” he continued. “I think you are losing your culture. Look around. You go through certain areas that didn’t exist ten or 15 years ago.”

That argument — that immigration changes existing “culture” for the worse — is a staple of white nationalist rhetoric in the United States.

Trump has never explicitly argued that immigration is a threat to white Americans, but he’s made numerous comments in the past that tiptoe around that point. When Trump earlier this year was reported to have disparaged migrants from Haiti and Africa as arriving from “s—hole” countries (preferring migrants from countries like Norway), racists and white nationalists celebrated the description and the distinction he drew. …

It’s true, of course, that immigration does change the “fabric” of a nation. Where Trump differs from most — and where he seemingly agrees with white nationalists — is that this is a negative.

Our history suggests both that views of undesirable migrants evolve over time and that the introduction and assimilation of immigrants is broadly seen as beneficial to American society. At one time, Italian, Irish and Eastern European migrants to the U.S. were considered undesirable and often turned away. These people are now part of the Europe whose culture Trump is so eager to defend.

“These people are now part of the Europe” … Is the Washington Post stating that Italians, Irish, and Eastern Europeans were once not part of the culture of Europe?

In general, it’s hard for respectable American thinkers to think about the subject of immigration other than through the all-dominating lens of modern Jewish resentment of old-time WASPs for not being wholly ecstatic about their great-grandparents arriving in large numbers, and, in fact, not inviting them to join Maidstone Country Club.

Trump’s comments to the Sun were specifically about Europe, not the United States. It’s a bit odd to speak about Europe’s “culture” as a monolith, given the existing and increasing cultural diversity of its countries. One assumes Trump is referring to the idea of “Western civilization,” inextricable from Europe’s history — but this, too, is a phrase often embraced by white nationalists as a way of talking about white culture.

People like the late art historian Lord Kenneth Clark who talk about “Western civilization” as being represented by Michelangelo and Beethoven are just white nationalists trying to distract from the fact that everybody knows “white culture” is mayonnaise on white bread and other bland white things.

This was the hedge used by King in 2016 when he asked on MSNBC during a conversation about the prevalence of older white people at the Republican convention, “where are these contributions that have been made by these other categories of people that you’re talking about, where did any other subgroup of people contribute more to civilization?”

Trump’s comments to the Sun evoked most immediately his response to the racist protest in Charlottesville last year. …

In a news conference with British Prime Minister Theresa May on Friday, Trump repeated his claim that immigration was “a very negative thing” for Europe.

May expressed no concerns about threats to British culture whatsoever.

Rotherham is Who We Are, evidently. The Arc of the Moral Universe is long, but it bends toward Pakistani pimps organizing the gang rapes of underage English girls.