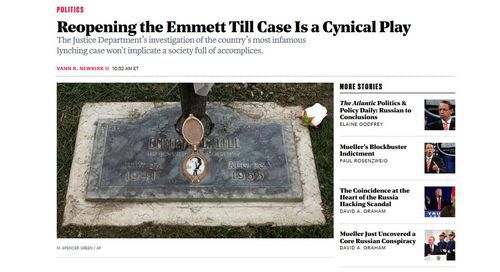 ATLANTIC: Reopening Emmett Till Case Won't Get to the Bottom of the Vast Racist Conspiracy

Reopening the Emmett Till Case Is a Cynical Play

The Justice Department’s investigation of the country’s most infamous lynching case won’t implicate a society full of accomplices.

Guilt is in your blood, you “people who think they are white,” as Ta-Nehisi Coates has explained.

JACKSON, Miss.—If there is a fight to be had for the future of America, it will be waged in the Delta.

Because, as we all know, America Is Made Out of Cotton, so what land could be more important to the future than the rural cotton belt south of Memphis?

The great alluvial plain to the west and north of here, stretching from Vicksburg on up to Memphis, and expanding out like a fan from the mighty Mississippi River, is a storied home to movement, and is the proving ground of the laws and legends that make the country what it is today. Past the soybean farms and pine stands, the cotton plantations and catfish ponds, there’s a political significance to this agricultural expanse. The Mississippi Delta is a reservoir of demographic strength—the blackest part of the blackest state in the country. But it is also one of the poorest places in America …

It’s a paradox! Clearly, there must be some vast racist conspiracy that keeps this “reservoir of demographic strength” so poor.

… The larger conspiracy around Till’s death, and the brutal assassinations of so many of Mississippi’s sons, daughters, and descendants, is the very existence of the current status quo, which white violence built.

… The ghosts of the martyrs have haunted the South, always rallying the descendants of slaves and sharecroppers and helping create generations of activists who demand ever more from the hegemonies that extracted blood and money from them.

For some reason, though, there’s not much money left in the Mississippi Delta. Where’d it go? Why is Minnesota richer than Mississippi? Obviously, there was some kind of conspiracy that needs a theory to explain why.

And the unsolved nature of Till’s death has been a parallel to the unsolved status of black people in America, a reminder of the restitution and reconciliation that have long been demanded, but have never been granted. The eternal taunt of the Bryant boys is an inconvenience for those who maintain that the country is past all that already.

Fortunately, we can have show trials every day in the media of “people who think they are white.”