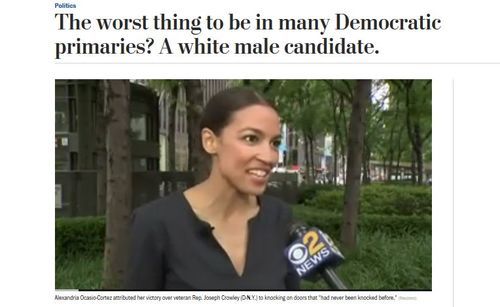 WaPo: "The Worst Thing to be in Many Democratic Primaries? A White Male Candidate."

The worst thing to be in many Democratic primaries? A white male candidate.

By Michael Scherer and David Weigel
June 27 at 8:03 PM

The newest star of the Democratic Party, Alexandria Ocasio-Cortez, launched her New York congressional campaign by declaring “women like me aren’t supposed to run for office” — a jarring embrace of her distinction as a 28-year-old Latina less than a year removed from a job tending bar.

Her campaign slogan: “It’s time for one of us.”

That appeal to the tribal identities of class, age, gender and ethnicity turned out to be a good gamble, steering her to the nomination in a year when Democratic voters are increasingly embracing diversity as a way to realize the change they seek in the country.

Given an option, Democratic voters have been picking women, racial minorities, and gay men and lesbians in races around the country at historic rates, often at the expense of the white male candidates who in past years typified the party’s offerings. ­Ocasio-Cortez’s opponent, veteran Rep. Joseph Crowley, a white man representing a ­majority-minority district, fit that bill.

The divide is more stark than any other so far in the primary season, and it reflects the party’s growing dependence on female and minority voters.

The ideological splits between liberal and far-left candidates were predicted to be the focus of clashes this year, but voters have sent conflicting signals on that front.

The tribal trend has implications for the 2020 Democratic presidential primary, where a historic number of nonwhite and female candidates are considering launching campaigns, including Sens. Kamala D. Harris (Calif.) and Cory Booker (N.J.). They will likely face off against a cadre of more traditional white male candidates, including possible bids by former vice president Joe Biden and former Virginia governor Terry McAulliffe.

“The ideological part is only a very small piece. There is something deeper going on,” said Simon Rosenberg, a strategist at the New Democratic Network. …

Many of the key Democratic House primaries this year have been competitions over biography, with a premium given to those who break new ground or remove old barriers. …

I thought Ben Jealous was from Pebble Beach, CA?

Through the end of June, 151 women have won House Democratic primaries, nearly doubling the 81 female nominees at the same point in the 2016 cycle, according to data collected by the Center for American Women in Politics at Rutgers University. Republican nominations of women rose much more slowly, to 32 in 2018 from 27 in 2016. …