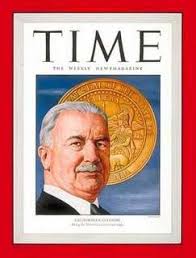 "Californians weren’t always this incompetent. In fact, California invented the modern American dream. The brilliant banker A.P. Giannini pioneered the mass marketed thirty year mortgage. Under his leadership the Bank of America perfected the growth engine that drove this whole country for sixty years. The bank lent money through the municipal bond market to build the infrastructure for new subdivisions. It lent money to real estate developers to build housing developments and lent money to consumers for mortgages and to buy cars. The tax revenues from the higher land values in the subdivisions payed for the bonds and the schools. The jobs provided by a favorable combination of a good business climate and government support (highway infrastructure, defense spending and industrial investment originally related to World War Two and continuing through the Cold War) put money in consumers’ pockets to pay for it all. Hollywood (also originally banked by Giannini) sprinkled it with magic dust, and the world gazed in awe."[SCOTUS Makes It Official: California A Failed State, May 27, 2011]

Sure. But Giannini's success stemmed from him being the child of Italian immigrants, and started with him founding the Bank of Italy to serve the early 20th century Italian immigrant community—who were notable for their parsimonious, thrifty, and frugal habits.

As we have to keep reminding Michael Barone, Mexicans aren't Italians.