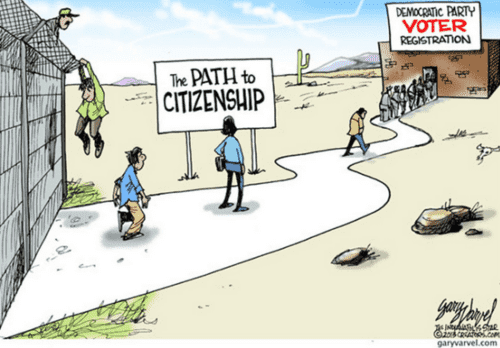 Prospects for an immigration overhaul have dimmed over the summer congressional recess, as a newly crowded agenda damps what already was tepid interest among House leaders in taking up the issue.

… Democrats working on a bipartisan House bill say it is completed and that they are waiting for Republicans to agree to release it. But a Republican in the group, Rep. Mario Diaz-Balart of Florida, disagreed, saying his conversations with fellow Republicans have convinced him that further changes are needed.

I guess the WASP fractions in GOP who are trying to fight inter generational demographic…got the better. (Sic)

The Republicans must feel that they can either capture the White House without Hispanic support …they will be just the party of the South and rural "heartland".

A robust response from Charles Heimerdinger I would rather live in "whitelandia" than "blacklandia" any day of the week. drew the sneer from

We all were wondering how the trailer trash felt about this issue. Now, we know.

Patriots should be under no illusion: the primary force driving the Open Borders crowd is the lust to destroy the historic American Nation.

They are not going to stop.