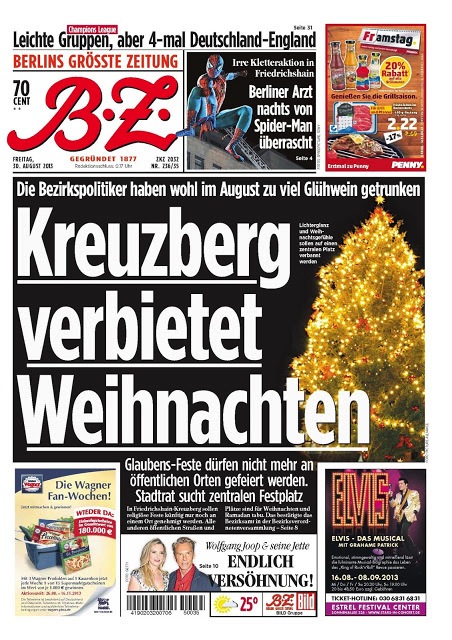 In the Kreuzberg district of Berlin, the neighborhood leaders have gotten off to an early start on Christmas bashing, in fact forbidding it entirely. The excuse is to prevent Muslims’ sensitive feelings from being hurt.

Kreuzberg is a very diverse area, with many Turkish Muslims. As of 2006, 31.6% of Kreuzberg’s residents were not German citizens.

The article has been translated from the original in MM News by the IslamVsEurope blog, which notes, “Kreuzberg is notorious as one of the most Muslim-colonised parts of Berlin and Germany.”

As of now, Christmas is banned in Berlin’s Kreuzberg – at least as far as celebration in public places is concerned. Christmas is only allowed in the home, so that the religious feelings of others are not injured.

No April Fool: the district office of Berlin Friedrichshain-Kreuzberg is doing away with Christmas. The authorities are allowing no more Christmas celebrations in public places or streets. A Christmas tree may only be set up in a central location, allocated by the authorities in advance – so reports the “Berliner Zeitung”. The ban on celebrations was decided by the Greens, the Left and the Pirates. The SPD [Socialists] and CDU [Merkel's party, mainstream right] were apparently against it.

The responsible city councilman Peter Beckers (SPD) responded to protests against the ban on the public celebration of Christmas to the BZ: “Why do religious celebrations need to be celebrated in public?”

Background to the Christmas ban: In August Muslims wanted to celebrate the end of Ramadan on Berlin’s streets. There were complaints from locals worried about the noise. The District Office made “short work” of these and immediately banned all religious celebrations – including Christmas, on the grounds of “equal treatment”.