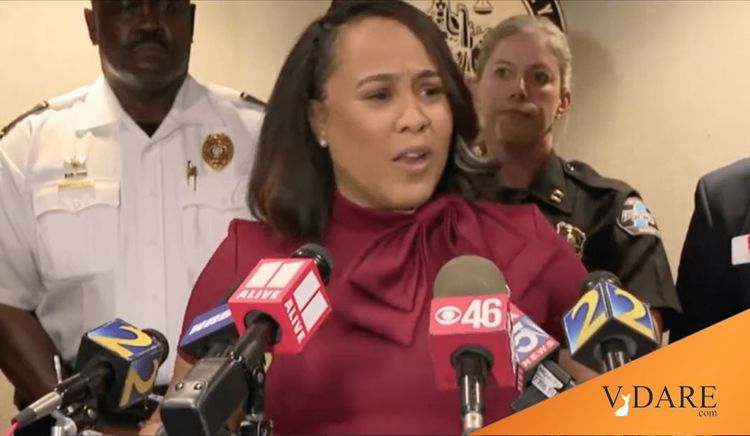 At this point, all you can do is laugh.

Fulton County District Attorney Fani Willis is not to be played with.

According to investigators, the suspected gang members used social media to track their victims, usually targeting celebrities and influencers who show their wealth online. 16 victims were named in the indictment, including singer Mariah Carey and NFL player Calvin Ridley.

During a press conference on Wednesday, Willis had a stern message for gang members who reside in Fulton County, Georgia.

“If you thought Fulton County was a good place to bring your crime, to bring your violence, you are wrong and you are going to suffer consequences,” said Willis directly to any would-be criminals who may have been tuned in.

“Get out of this county, or expect to see sentences go life plus.”

But Willis didn’t stop her warnings there.

“I am not going to negotiate with gang members, I will not allow pleas. We are going to find you, we are going to convict you, and we’re going to send you to prison for the rest of your days and I’m not apologizing for that.”

She was then asked by a reporter if she was targeting the Atlanta rap community and she responded by pretty much telling rappers to stop snitching on themselves.

“I’m not targeting anyone, however, you do not get to commit crimes in my county and then decide to brag on it, which you do as a form of intimidation and to further the gang and to not be held responsible.”

She then recited the rap lyrics from the indictment stating, “I have some legal advice. Don’t confess to crimes on rap lyrics if you do not want them used. Or at least get out of my county.”

On May 9, Young Thug, whose real name is Jeffery Williams, and 28 members of his YSL record label, including popular rapper Gunna, were arrested by Willis and charged with offenses under the Racketeer Influenced and Corrupt Organizations (RICO) Act, as well as participation in street gang activity.

Word of advice to any folks looking to commit crimes in Fulton County. Don’t do it, not on Fani’s watch.

It’s not dishonest to point out if Atlanta were devoid of a black population, there would be virtually no fatal or nonfatal shootings in the city.

It’s the truth. No DA of this iteration of a black-less Atlanta would be begging the remaining population not to brag in rap videos or their lyrics…

Even in the Black Mecca, Wakanda isn’t real. And black lives don’t matter.

Do people realize how prosperous America would be had the American Colonization Society succeeded with its stated goal?