Silicon Valley remains a big magnet for foreigners dreaming of tech jobs. One popular ticket is admittance to a squirrelly unaccredited university. Washington curiously allows student visas for unaccredited schools, despite the obvious scam appeal, and the result is rubber-stamping visas for dollars. Lots of dollars, as more foreign students are admitted. 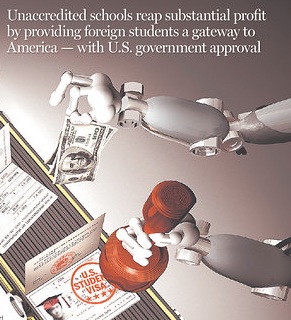 Most of the visa grifters come to rip off American jobs, but the permissiveness also attracts terrorists. One example is Khalid Ali-M Aldawsari, a Saudi student arrested in February on charges that he planned to build bombs for terror attacks inside the United States. More than 26,000 Saudis got F-1 and F-2 visas in 2010, up from 6836 in 2001, based on the kumbaya idea (from George Bush and the State Department) that increased numbers of Saudis educated in the US would mean better relations and less jihad.

The San Jose Mercury News did an investigative report on visa mills and featured it on its Sunday front page (image here). 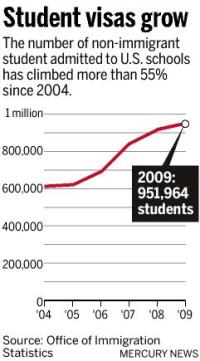 With his new student visa, Prasanth Goinaka was on a path toward his dream: an MBA from an American university in the heart of Silicon Valley.

That's why his parents back in India were stunned when their 28-year-old son was killed while manning a cash register at a convenience store in Oklahoma City - 1,500 miles from campus.

A Bay Area News Group investigation has found that Goinaka - as well as thousands of other foreign students enrolled in schools here - probably should not have been in the country at all. They're being lured by unaccredited universities that promise help getting a prized student visa. But it turns out that these universities' legal right to assist with visas is in question.

Once here, students like Goinaka often have to go to extraordinary lengths to pay the bill.

But how he ended up losing his life halfway across the country from San Jose's International Technological University is part of a much larger story of the U.S. government's failure to catch up to a growing problem in America's higher education system.

Little-known and less-watched, a group of schools - including San Jose's ITU, Sunnyvale's Herguan University and until recently Pleasanton's now-shuttered Tri-Valley University - are building lucrative businesses by assembling student bodies comprised almost entirely of student-visa holders. Yet, the newspaper's investigation found none of the schools meet the criteria necessary to assist foreign students to come here: They are neither accredited nor do their credits transfer to recognized universities.

"Universities like Tri-Valley are causing an enormous surge of international students," said Mohan Nannapaneni, secretary of the Milpitas-based Telugu Association of North America. The Indian nonprofit group raised $5,465 to ship Goinaka's body to his distraught parents and donated legal help to 155 traumatized Tri-Valley students, some tagged with electronic tracking devices when the federal government shut down the school on visa fraud charges.

"Why are we putting immigration authority into (these) "... universities' hands?" Nannapaneni said.

But records reviewed by the newspaper tell a different story about the schools' actions, and suggest the government and even the students themselves are to blame for the problem.

Government approved A decade after terrorists in the country on student visas carried out the Sept. 11 attacks, the Department of Homeland Security - the very agency established to oversee a tougher visa system - endorses universities that should be ineligible to issue the necessary certificate for students to gain F1 student visas, records show. It even places these schools on the list that international students consult before pursuing a degree in the U.S.[More]