Vicente Fox, who has been the ex-president of Mexico since 2006, has been ranting against Donald Trump since soon after the latter announced his candidacy.

Fox ranted against Trump when Trump was a candidate and rants about him when he’s president.

A cynic might say Fox is trying to keep in the public eye, and that is probably part of it. But I think that Fox is personally offended that the anti-globalist Trump might reverse much of the Mexican hegemony that Fox helped to win over the United States.

The rant begins with DACA

September brought great sadness, frustration and anger when the president of the United States, Donald Trump, called on Congress to phase out DACA, or the Deferred Action for Childhood Arrivals, a program that assured the future of around 800,000 children from all over the world who are living in the United States, protecting them from deportation. Making up nearly 80 percent of that figure, Mexicans will be disproportionately affected by an end to the program.

Fox makes it sound like these DACA recipients are still all minors.

Latinos, particularly Mexicans, have been the main targets of President Trump’s constant racial attacks. According to Mr. Trump, we are guilty of all sorts of criminal acts. We have been called rapists, drug traffickers and thieves who steal American jobs. He has demanded that we pay for a wall to be built between our two nations that would prevent us from entering the United States.

Fox sees the DREAMers as examples of a new, evolved type of citizen existing in every nation.

Every country has its own Dreamers, as these young immigrants are known. As they grow up, study, build businesses and exchange ideas, they help fortify a globalized world where cultures mix. The residents of this modern world order endorse a new kind of citizenship and democracy. They don’t settle for voting, but are eager to protest when they believe they are being treated unjustly. They strive for self-sustaining economic growth. They are concerned with the major shifts in climate around the planet. These citizens of the world know their value. Regardless of skin color, upbringing or nationality, they are able to thrive in different types of environments. We see examples every day of these evolved people, who are fighting to end racism and bring equality, inclusion and representation to their governments.

Hey, what if Americans don’t want to be invaded by “these evolved people” and want to run their own country?

America is so admired because of what it seems to represent: equality and opportunity and heterogeneity. Rescinding DACA would be a huge step backward for a nation that has always prided itself on its forbearance. The potential damage to hundreds of thousands of lives is unquantifiable, and the upside is nonexistent. This change would punish the people who wanted so badly to live in a country that they risked everything they had to get there.

Fox tells readers what sort of future he envisages.

If the future is bringing the notion of a global identity, and countries without borders, it remains imperative that we prioritize the preservation and celebration of our cultural traditions. Our customs provide us with an exciting mix of ideas, experiences and stories to contribute.

Hey Vicente, what if we don’t want “a global identity”? What if we want countries with borders?

Conservative movements have risen in opposition to this cultural blending, not only in America, but all over the world, from the Brexit efforts in Britain to the far right party Alternative for Germany’s presence in this year’s election. Rapid change and disruption have brought instability and concern, and in response conservative leaders are promising tranquillity and security through protectionism and excessive nationalism. We cannot resort to this old answer to a new struggle. It is no longer feasible to shut our doors in a world that is commingled politically, economically, socially and culturally. Banning men and women from entering a country based on their religion is bigoted and hateful.

Historically, Mexico didn’t allow that many Muslim immigrants into its country. Most of the Middle Eastern immigrants to Mexico were Christian, not Muslim.

Fox began with DACA, and ends with DACA

Denying refugees and those seeking asylum the opportunities many of our countries are equipped to provide them is needlessly cruel and, as in the case of DACA, only serves to hurt our most vulnerable fellow humans.

Hey Vicente, why aren’t you starting a movement in Mexico to take in more refugees and immigrants?

One of the photographs accompanying the Fox op-ed is the view of a border wall from the Mexican side of the border. McDonalds-like golden arches have been painted on the wall, along with the message “MEXICO Billions of acres stolen!”. 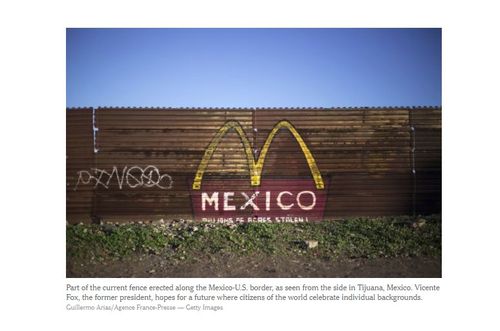 Whether that was put in by the New York Times editing process, or by Fox himself, it’s a rather curious photo to put in an op-ed proclaiming globalism and a global identity.