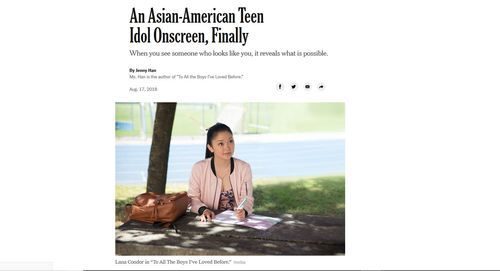 Various Asians: What America Needs Is More Asian Celebrities Who Look Like Me, Such As, Well, Me!

But they’re not haranguing us about this vast societal shortcoming because their agents told them they need to do more self-promotion. No, they are doing it For The Children, the children who look like them, as well as the ex-children who are them.

Like Black Panther last winter, the current hit movie Crazy Rich Asians, which I’m reviewing in Taki’s Magazine on Wednesday, has generated a lot of this kind of tie-in content. For example, from the New York Times last week:

An Asian-American Teen Idol Onscreen, Finally
When you see someone who looks like you, it reveals what is possible.

By Jenny Han
Ms. Han is the author of “To All the Boys I’ve Loved Before.”

… No matter how I did my hair, I was never going to look like any of my idols or any of the girls in my cherished Delia’s catalog. No average girl would ever achieve that impossible ideal, but if she was white, she did see a glossier version of herself in movies and on magazine covers and TV. As an Asian-American girl, I didn’t have that experience. …

When I sold my first middle-grade novel in 2005, it wasn’t that common to put an author photo on the back flap, but 24-year-old Korean-American me insisted. I wanted Asian girls to see my face. And more than that, I wanted them to see what is possible. …

What would it have meant for me back then to see a girl who looked like me star in a movie? Not as the sidekick or romantic interest, but as the lead? Not just once, but again and again? Everything. There is power in seeing a face that looks like yours do something, be someone. …

Because when you see someone who looks like you, it reveals what is possible. It’s not just maybe I could be an actress. It’s maybe I could be an astronaut, a fighter, a president. A writer. This is why it matters who is visible. It matters a lot. And for the girls of 2018, I want more. I want the whole world.

And from the New York Times today:

If you are Asian-American, you have most likely heard of a movie called “Crazy Rich Asians,” based on the popular novel of the same title by Kevin Kwan. If you are not Asian-American, maybe you are wondering why a romantic comedy is causing so much excitement. If you are saying to yourself that it’s just a movie, you probably take for granted that there are many movies that feature people like you. For Asian-Americans, however, one movie can be of enormous consequence.

One of the movie’s stars, Constance Wu, explained that the importance of “Crazy Rich Asians,” with its all-Asian-American cast, comes from a desire for “narrative plenitude.”

I came up with that idea in my book “Nothing Ever Dies: Vietnam and the Memory of War.”

Did I mention that an actress in a currently popular movie may have borrowed a phrase from my book, which is available on Amazon for overnight delivery?

Narrative plenitude is what makes it possible for Hollywood to make so many Vietnam War movies. Not just “Apocalypse Now” and “The Deer Hunter” but also “Platoon” and “Full Metal Jacket” and “Rambo.”

They are all set in Vietnam, and some of them are excellent works of art, but they are all dramas of white American masculinity.

Masculine white Americans … what’s the deal with them?

Oh, well, because that would be whitewashing and cultural appropriation. Which is as equally bad as not making movies about people like me.

But these are American movies, you might say. Of course they should be about Americans. That does not explain why blacks, Latinos, Native Americans, women or yes, Asian-Americans, all of whom served in the American military, barely appear in these movies.

Because, obviously, us Asian are in perfect solidarity with blacks, Latinos, Native Americans and women against the enemy: masculine white Americans.

Oh no … In two of those five Vietnam movies, the central character is played by a Latino with the birth name of Estevez.

I’m sure Mr. Nguyen will be hearing from the Spanish-Americans Are Latinos Too (SPAALT) organization shortly.

It matters because I, and most other Asian-Americans, grew up and still live in the opposite of “narrative plenitude.” We live in an economy of narrative scarcity, in which we feel deprived and must fight to tell our own stories and fight against the stories that distort or erase us. Many Americans will take these Asian images — which are usually awful — and transfer them to any Asian-American they encounter.

The most notorious examples are characters like the Japanese landlord in 1961’s “Breakfast at Tiffany’s,” played by a bucktoothed, slant-eyed Mickey Rooney,

Mickey Rooney’s Mr. Yunioshi is the Emmett Till of casting, destined to be mentioned in the NYT forever.

or the heavily accented foreign student Long Duk Dong of 1984’s “Sixteen Candles,” who was at least played by an Asian-American, Gedde Watanabe.

Or Dr. Haing S. Ngor, who won the 1984 Oscar for Best Supporting Actor for portraying the heroic Dith Pran in The Killing Fields, but who can remember a celebrated epic compared to a John Hughes comedy?

Many Asian-Americans winced at these portrayals, knowing that they might be subjected to the slant-eyed, bucktoothed, ching-chong mockery of their classmates or random people, including adults. …

For Asian-Americans, if “Crazy Rich Asians” succeeds, we all do; if it fails, we all do. …

The real test of narrative plenitude is when we have the luxury of making mediocre movies.

In fact, I have several mediocre screenplays in my desk drawer that I’d willing to auction off.

If you try to read my Wikipedia page, you’ll soon be exhausted by my widely acclaimed awesomeness:

Viet Thanh Nguyen (born March 13, 1971) is a Vietnamese- American novelist. He is the Aerol Arnold Chair of English and Professor of English and American Studies and Ethnicity at the University of Southern California.[1] Nguyen’s debut novel, The Sympathizer, won the 2016 Pulitzer Prize for Fiction among other accolades, including the Dayton Literary Peace Prize, the Center for Fiction First Novel Prize, the Carnegie Medal for Excellence in Fiction from the American Library Association, the Edgar Award for Best First Novel from an American Author from the Mystery Writers of America, and the Asian/Pacific American Award for Literature in Fiction from the Asian/Pacific American Librarians Association.[2] He was awarded a MacArthur Foundation Fellowship in 2017.[3] …

Nguyen has also been a fellow of the American Council of Learned Societies (2011-2012), the Radcliffe Institute for Advanced Study at Harvard (2008-2009) and the Fine Arts Work Center (2004-2005).[1] He has also received residencies, fellowships, and grants from the Luce Foundation, the Mellon Foundation, the Asian Cultural Council, the James Irvine Foundation, the Huntington Library, the Djerassi Artists Residency, the Bread Loaf Writers’ Conference, Creative Capital and the Warhol Foundation.[1]

His teaching and service awards include the Mellon Mentoring Award for Faculty Mentoring Graduate Students, the Albert S. Raubenheimer Distinguished Junior Faculty Award for outstanding research, teaching and service, the General Education Teaching Award, and the Resident Faculty of the Year Award.[1] Multimedia has also been a key part of his teaching: In a recent course on the American War in Viet Nam, he and his students created An Other War Memorial, which won a grant from the Fund for Innovative Undergraduate Teaching and the USC Provost’s Prize for Teaching with Technology.[1]

Seriously, I’m a 47-year-old official MacArthur Genius based in L.A., but I only have 3 IMDB credits, all for junk like being interviewed on the Tavis Smiley Show.

That is one measure of equality — the right to be mediocre and rewarded for it, rather than the demand, placed on Asian-Americans and “Crazy Rich Asians,” to be exceptional just to be seen.

Viet Thanh Nguyen, a contributing opinion writer, is the author, most recently, of “The Refugees” and the editor of “The Displaced: Refugee Writers on Refugee Lives.”

Did I mention that I am a refugee (as well as the holder of the Aerol Arnold Chair of English and Professor of English and American Studies and Ethnicity at the University of Southern California)? And I’m currently working on several other properties, such as Lord of the Refugee, Game of Refugees, Black Refugee Panther, and, since this weekend, Crazy Rich Refugees.