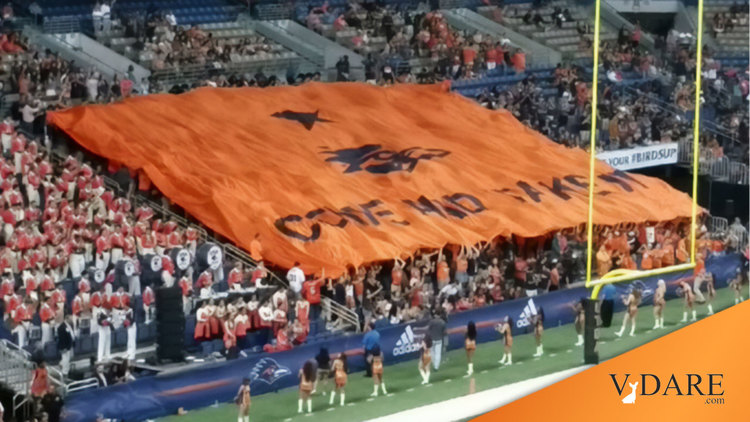 Earlier: Black Football Players At University Of Texas Want "The Eyes Of Texas" Retired Because The Past Is Racist

Come and Take It.

An amazingly cool phrase, originating almost 200 years ago at the genesis of Texas’ independence.

Racist and xenophobic, immediately needing to be retired.

Historical slogans are now a victim of rampant college and social media-driven “cancel culture.” The phrase “Come and take it” is now considered racist and divisive and the University of Texas-San Antonio is retiring it and accompanying imagery from its football games.

In its announcement, University President Taylor Eighmy wrote that the slogan and flag were integral parts of Texas history. Eighmy said that the state’s history “is steeped in the tradition of the ‘Come and Take It’ image.” However, in the same breath, Eighmy claimed that the slogan has become an example of a politically divisive chant used by white supremacists, anti-government and anti-gun control groups.

The university president penned, “Recently, this imagery has been associated with some political movements and causes.” He concluded, “For these and other reasons, this tradition may no longer reflect its originally intended purpose of rallying football fans and is not reflective of our university, our founding mission and our collective values.”

The slogan and flags will no longer be a part of home football games for the Roadrunners. The roadrunner is the university’s mascot. Instead, the university established a “task force to explore” new potential traditions instead of the popular rallying cry of “Come and Take It.”

Historically, the slogan came into existence when Texas settlers resisted demands by the Mexican government to turn over a cannon. Since that incident, Texans have used the slogan as a rallying cry for freedom.

Despite its history, critics cited the January 6, 2020 U.S. Capitol riot as an example of how the slogan had been allegedly co-opted by extreme groups. If anything, the slogan demonstrates an act of defiance against the then-Mexican government in Texas.

In post–George Floyd America, everything once celebrating White America must go.