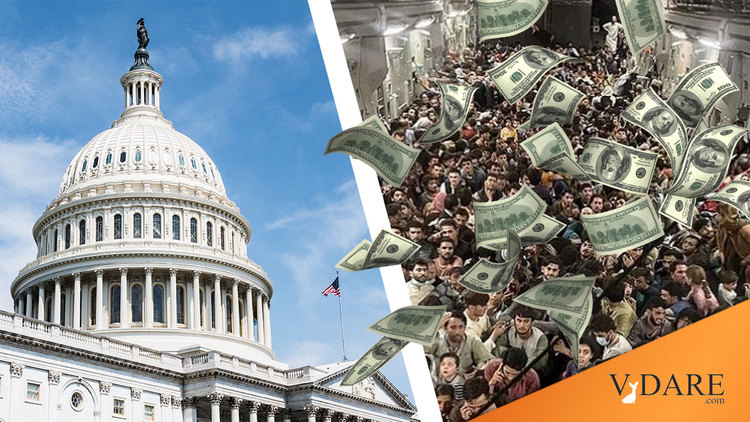 The Senate passed a spending bill Thursday that funded the resettlement of Afghan "refugees." Some Republicans tried to stop but couldn’t get enough support to kill it. Arkansas Sen. Tom Cotton introduced an amendment to strip the spending bill of this unnecessary funding. Surprisingly, all 50 Republicans voted in favor of it. Considering how squishy the establishment is, this was notable. However, not a single Democrat supported it. A tied-vote ensures an amendment can’t pass [The Senate rejects a Republican bid to curtail help for Afghans who were evacuated during the U.S. withdrawal., by Luke Broadwater, New York Times, September 30, 2021].

Republicans could’ve killed the spending bill if they had stayed resolute against the funding for Afghans. Unfortunately, 15 Republicans caved and ensured the spending bill's passage [Congress approves a short-term spending bill to keep the government open, sending it to Biden’s desk., by Emily Cochrane, NYT, September 30, 2021]. If only six more had voted against it, it would’ve failed to overcome the filibuster. That would’ve given Republicans a stronger position to insist on the elimination of funding for Afghan refugees. It’s also a popular position, as a majority of voters oppose government assistance for Afghans [Afghanistan: Voters Don’t Want to Pay for Resettling Refugees, Rasmussen Reports, September 24, 2021].

Trump adviser Stephen Miller warned about the dangers of the provision on Twitter.

The resettlement language is in Section 2502 of the House bill. Needs 60 votes to pass: https://t.co/0Cqh2saWHB

McConnell says deal he struck w/Schumer funds resettlement of “vetted” Afghans. False. The bill says “notwithstanding any other provision of law,” Afghans are covered if admitted “to the satisfaction of” DHS Secy. In other words, it *eliminates* statutory vetting requirements. https://t.co/WvnskDW7eG pic.twitter.com/28V8hEBo2J

Not enough Senate Republicans listened to his plea. Miller hopes enough pressure can be exerted on moderate House Democrats to block its final passage, but as the budget deadline is set to expire by midnight, it appears they will vote in lockstep for the short-term spending bill.

Now the question remains whether Democrats can pass the horrible budget bill. The clock is ticking.