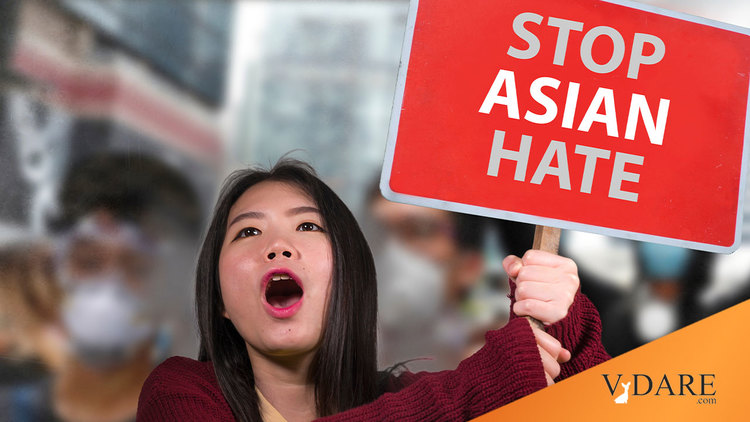 Dozens of protesters gathered at an intersection in Los Angeles County in March 2021, waving colorful signs that read: “Stop Asian Hate” and “End the Violence Against Asians.”

Most people honked in support of the demonstrators in Diamond Bar, but prosecutors say one driver expressed disgust.

“Go back to China!” the man yelled, according to a federal indictment.

He then rolled a black Honda into a crosswalk where some of the protesters, including a child, were walking, the indictment says. No one was injured, but the driver allegedly yelled racial slurs from the car while making a U-turn through the line of protesters.

, a 56-year-old resident of Diamond Bar and the driver of the car, has been charged with two counts of “bias-motivated interference” of a protest and faces up to 20 years in prison, the U.S. attorney’s office in Los Angeles announced Thursday. Dominguez was arrested Thursday and pleaded not guilty, a Department of Justice spokesman said. Dominguez could not be reached for comment, and it was not immediately clear whether he had an attorney.

The incident took place five days after a gunman fatally shot eight people, including six Asian women, at three Atlanta-area spas. The massacre stunned many in the Asian-Pacific Islander community, which was already on edge from a spike in racist attacks during the coronavirus pandemic.

As I pointed out, in the first two weeks after that Atlanta shooting, the Washington Post ran 198 articles referencing the incident, because the shooter was white and thus could be blamed on Trump saying the words “China virus” almost a year before (even though the murderer articulated quite different motives).

The rally in Diamond Bar was one of several organized in Southern California in the wake of the Atlanta shootings, the Los Angeles Times reported. Diamond Bar, a 30-minute drive east of Los Angeles, is a city of 55,000 residents, 59 percent of whom are Asian.

As the demonstrators chanted and waved signs at all four corners of a busy intersection, one group of protesters crossed the crosswalk.

That is when Dominguez, stopped at a red light in his Honda, yelled, “Go back to China!” according to court records.

Prosecutors say Dominguez then drove into the crosswalk against the red light, cutting off some of the demonstrators. Then he made a U-turn in the intersection and again drove through the populated crosswalk, barely missing pedestrians — including a 9-year-old child, prosecutor say. As he did this, Dominguez again made a disparaging comment about China, the indictment states.

Dominguez then pulled his car over and continued to scream taunts and racial slurs at the rallygoers, prosecutors say. “I’ll be back,” Dominguez said, according to the indictment.

Identifying himself as “John Doe,” Dominguez later called the police and reported that the demonstrators had blocked the street and he was forced to run the red light “because they were about to trample my car,” the indictment states. He allegedly asked the police to deploy crowd control.

In other crime news, on Wednesday of this week, a man shot three Korean women at a hair salon in the Korean part of Dallas. Fortunately, what with the shooter being black and Sailer’s Law of Mass Shootings, none were killed.

Well, the Dallas shooter, who is still on the run, was identified by the police as a black man, so, whaddaya think?

Thanks to alert readers, it turns out that the Washington Post did run an AP article about the Dallas shooting, but without using the word Korean (much less black)…to tell you that it’s a Really Boring story.

DALLAS — The Dallas police chief said Thursday that they don’t believe a shooting at a hair salon in Dallas’ Koreatown area that injured three women was a hate crime.

“In this particular case, we have no evidence to point that hate is a factor, and to say otherwise would be irresponsible for us, to have a community live in fear,” Dallas police chief Eddie Garcia said.

“If there were a nexus to hate, we certainly would be conducting outreach to ensure our community knows,” Garcia said.

Authorities are still searching for a man dressed all in black who shot the three women Wednesday afternoon at Hair World Salon, which is in a shopping center with many businesses owned by Korean Americans. Police say the shooter drove off in a maroon minivan.

People of Dallas, be on the lookout for a fugitive gunman who was dressed all in black on Wednesday! What else do we know about his looks? Well, he drove a maroon minivan, not one of those white cars like in so many other articles about mysterious attacks on people of vaguely depicted race.

The three women were taken to a hospital with injuries that weren’t life-threatening, police said.

The daughter of one of the injured women said her mother told her that the man, who she didn’t recognize, calmly walked in, opened fire and then left.

“He was calm. He just walked up to it and then stood there — didn’t walk around — but stood there and shot like 20 shots and then just calmly went out,” said Jane Bae, who wasn’t there but had spoken with her mother.

Dallas Police Sgt. Warren Mitchell told KDFW that police believe the shooter shouted something when he came in, but police hadn’t figured out what it was.

Police said they were looking into reports of a dispute earlier in the day involving a customer to see if it’s connected to the shooting. “We’re not ruling it out, but right now I don’t want to relate the two unless I’m for sure,” Mitchell said.

Bae said that her mother, who owns the salon, and a salon worker were shot, in addition to a customer.

She said her mother said the worker who was shot had spotted the man with a gun heading toward the salon and ran toward the door shouting ‘no’ and tried to lock it, but wasn’t able to do so it in time.

So, the gunman of distinctive dress but completely indistinct race who fired 20 shots at women who were, if you read the clues carefully, probably Korean (but we are not going to spell it out for you) did NOT commit a hate crime. Got that. That’s the headline news. NOT a hate crime.

But, from today in the Dallas Morning News:

Shooting at northwest Dallas salon may have been a hate crime, police chief says

Three women of Korean descent were wounded in the shooting Wednesday.

By Jamie Landers and Hojun Choi

Police Chief Eddie García said Friday that a shooting that wounded three women of Korean descent at a hair salon in northwest Dallas may have been a hate crime — a day after he said police had ruled out hate as a factor.

A man fired multiple shots Wednesday inside the Hair World Salon in the 2200 block of Royal Lane before fleeing in a red minivan. Three employees in the salon were struck and were hospitalized with injuries that weren’t life-threatening. One customer was inside and was unhurt.

At a news conference at police headquarters, García said the shooting may be connected to at least two other crimes that have targeted the city’s Asian community.

The first took place on April 2, also in the 2200 block of Royal Lane, near Interstate 35E, where shots were fired into three Asian-owned businesses, but no one was injured. Witnesses reported that the driver fled in a red minivan.

And on Tuesday, a man believed to be driving a burgundy van shot into an Asian-run business in the 4800 block of Sunnyvale Street, near East Ledbetter Drive in east Oak Cliff. Three people were inside but were uninjured, police said.

García said Thursday that authorities had done their due diligence and that police could “confidently say that hate was not a motivating factor” in Wednesday’s shooting. But on Friday, the chief said the department’s stance changed because of the “ongoing investigation and a consistent review of officer reports made by the department’s crime analysis unit.”

… Police have described the gunman in Wednesday’s shooting as 5-7 to 5-10, with a thin build, curly medium-length hair and a beard. He was wearing all black, police said.

After all, the color of the clothes he wore on Wednesday isn’t something he can change, like the social construct of what race he or may not happen to be, which we didn’t mention.

The police chief said authorities were sharing information about the potential motive for the shooting in hopes it sparks enough action to lead to an arrest.

But this article isn’t going to mention what race he is, because everybody knows Sailer’s Law of Mass Shootings.