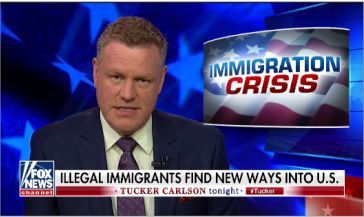 We routinely talk about America’s open borders, but the visa overstay method of invasion is even more unprotected: there’s no system to check on exits at all of foreigners who enter. As a result, hundreds of thousands enter the US legally on a temporary arrangement, but don’t leave, thereby becoming illegal aliens.

As the Washington Examiner recently noted, “More people overstayed their visas in 2017 than crossed into the United States illegally that year, the Department of Homeland Security said Tuesday.”

Former ICE Director Tom Homan appeared on Fox News Wednesday and opined that visa overstay should be made a crime the same as crossing the border illegally.

Last month, President Trump tweeted that the United States has the “DUMBEST & WORST immigration laws anywhere in the world!” As a Rasmussen poll following similar remarks in a speech showed, around half of voters agreed with the assessment. Perhaps a more recent survey reflecting the visa overstay facts would show an even higher proportion.

This chart shows the abuse by visa category: 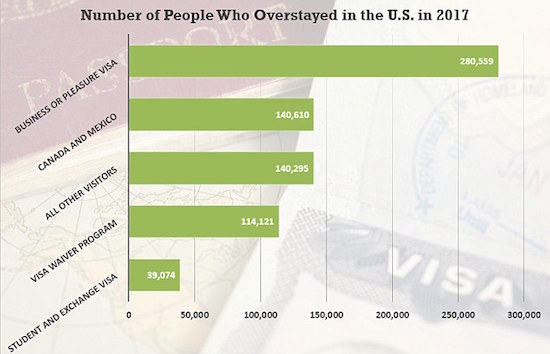 More than 400,000 people came to the U.S. on legal visitor visas in 2017 but were still here six months after their time was up, the government said in a new report Tuesday detailing the less-talked about side of illegal immigration.

While people jumping the border gets the most attention, “visa overstays” account for a large percentage of new immigrants who settle illegally in the country every year.

The 2017 numbers show a slight improvement compared to fiscal 2016. Officials said it’s too early to know what worked, but said better border security and immigration enforcement are potential causes, along with changes in visitor patterns.

Known as visa overstays, the people who refuse to leave when their permits expire account for a large portion of the new immigrant population each year.

They are a small fraction of the total travelers — slightly more than 1 percent of the nearly 53 million visitors who entered the country last year — but that still amounts to big numbers. Homeland Security said 701,900 people blew past their departure dates in fiscal year 2017.

The numbers likely will continue to drop as the months tick by, but Steven Camarota, research director at the Center for Immigration Studies, said he figures at least 200,000 each year stay for the long term. That’s at least equal to the 200,000 new immigrants he says come to stay each year by jumping the border.

“Half the problem of illegal immigration, at least, is related to overstays,” he told The Washington Times.

While jumping the border is a misdemeanor and sneaking back in after a previous deportation is a felony, overstaying a visa is not a criminal offense. The chief punishment is deportation.

From a security standpoint, people who overstayed a visa have undergone at least some screening and the government has had a chance to refuse entry to those who raised red flags. Migrants who jump the border never face any inspection.

Yet from the illegal immigration standpoint there’s little difference. One they’ve made it past that first barrier, be it the border or an inspector at a port of entry, the chances of arresting and deporting them are small, Mr. Camarota said.

“Our enforcement regime in the interior of the United States remains weak,” he said. “People can overstay visas with a lot of immunity.” (Continues)