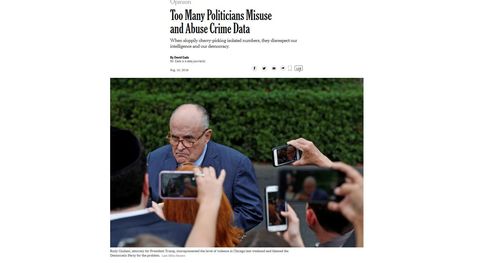 Earlier this week the NYT ran a weak oped from a “Chicago-based” journalist inanely criticizing Rudy Giuliani’s comments on Chicago’s problem with locals shooting each other. But that one didn’t lie hard enough, apparently, so now they are back with a second oped, this one from a “data journalist” “based in Chicago” that’s pretty much identical to the last one.

Too Many Politicians Misuse and Abuse Crime Data
When sloppily cherry-picking isolated numbers, they disrespect our intelligence and our democracy.

By David Eads
David Eads is a journalist based in Chicago with a focus on visual and data-based stories. He has worked for The Chicago Tribune, NPR and other outlets.

CHICAGO — … The political discourse around gun violence — much like that around climate change — relies on data and would greatly benefit from more careful use of it.

Crime in the United States is down roughly 50 percent since 1990. Both survey research and police statistics reported to the F.B.I. show the trend. It has gone down under Democrats and Republicans at all levels of government who use a wide variety of approaches to enforcement.

It went down in places like Dallas and San Diego, cities that have had a mix of Republican and Democratic mayors.

It went down in Chicago, a city that hasn’t had a Republican mayor since 1931.

Okay, but homicides in Chicago went up 58% from 511 in 2015 to 808 in 2016 after the Obama Department of Justice and the ACLU used the 11/23/2015 release of the video of the disgraceful police shooting of Laquan McDonald to impose new rules on the Chicago PD. Police stops fell 85% in a couple of months and homicides immediately went through the roof.

What happened in Chicago from 2015 to 2016 is one of the clearest case studies in the social sciences. That’s why the Establishment response is a lot of obscurantism about how you can’t really know anything for sure.

But American politicians fighting over the issue often fail to effectively or accurately talk about that data. …

That doesn’t stop politicians of different stripes from either declaring data trends that in fact don’t exist or finding easy answers to explain those that do. …

President Trump and Attorney General Jeff Sessions, both Republicans, have repeatedly made reference to a national crime wave that doesn’t exist.

Nationally, homicides, the most accurately counted crime, went up almost 22% from 2014 to 2016, the years in which the Obama Administration and the media backed Black Lives Matter. Much of that was in specific places where Black Lives Matter won celebrated triumphs over the cops, such as Chicago, Baltimore, and St. Louis.

In January 2018, I estimated that in 2017 homicides had dropped about 2% in the 50 largest cities. So, under Trump and Sessions, the rise in homicides had been broken, but they were still up about 20% over 2014.

Which is why going to over 800 in 2016 under the new stewardship of the DoJ and ACLU was more than a little noteworthy.

And as reporting on Chicago’s error-riddled gang database shows, the Chicago Police Department’s own data is far from perfect.

Dead bodies usually wind up getting counted, but smashed car windows? That happened to me maybe 4 or 5 times when I lived in Chicago. I don’t recall notifying the police.

Nor has the technology been able to stop a police misconduct problem that is as deep and intractable as gun violence on the street.

Hard-to-control factors such as the widespread availability of guns imported from other states may make it difficult for any politician, whatever the party affiliation, to have a large impact on the Chicago’s violence problems.

No, as we just saw, a bunch of Democratic politicians in the Obama Administration helped get 297 more people killed in Chicago in 2016 than in 2015.

Federal de-intervention in Chicago appears to have done some good, with homicides dropping from 808 in the last year of the Community Organizer-in-Chief getting his old community organized to 682 in the first year of the Trump Administration.

But to make sure we’re having a conversation

Uh-oh. You know what “conversation” means.

anchored in reality, we should also demand greater transparency from police departments regarding their staffing, databases and resources.

Maybe we should, you know, cite the actual numbers of homicides?