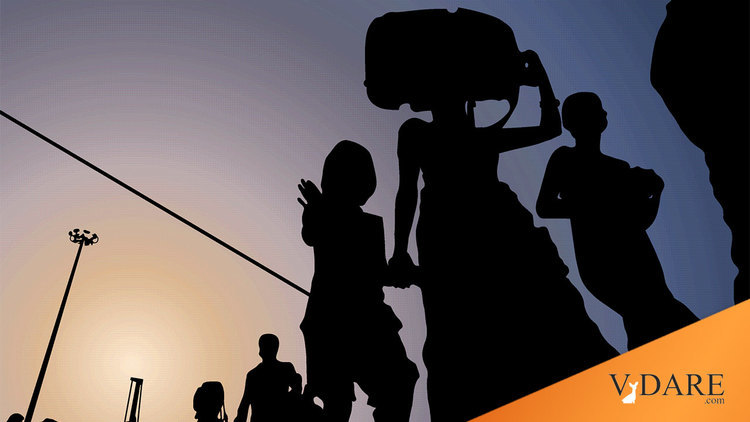 Bill O’Reilly’s Monday show introduction made an important point, that the open-borders left is rebranding the unobstructed flood of Central Americans from illegals to “refugees” which is clearly what’s happening. Keep in mind that a true refugee is a person fleeing political persecution or war, not poverty.

Following is a recent example of category rebranding, from the mouth of a top anti-sovereignty anarchist, Rep. Luis Gutierrez:

WASHINGTON — Latino advocates and leaders rallied outside the White House Friday morning to demand that President Obama stop a new policy of rounding up and deporting families who entered the United States illegally after fleeing poverty and violence in Central America.

Amid rising concern among Democrats in Congress over the raids that began last week with 121 women and children detained by Immigration and Customs Enforcement agents in three states, the group asked that Obama show “moral leadership” and grant temporary protected status to the families, similar to what many Central American war refugees were given in the 1990s. “We have a refugee crisis, not an immigration problem,” said Rep. Luis Gutierrez, D-Illinois, who said he was gathering support in Congress for a letter to the president asking him to stop the raids.

The message seems to be if Germany can have open borders for all or most of Syria (population 23 million), certainly substantially larger United States can absorb much of Central America (around 43 million persons).

But welcoming unscreened millions is admitting not only the unfortunate poor but also the violent gangsters who are propelling many to leave the region. Certainly diverse gangsters recognize the better crime opportunities that a wealthier nation offers and come also. But why relocate Central America’s pathology here? Obama’s open doors invite the entire package.

Central American nations have some of the highest murder rates on earth:

Following are O’Reilly’s remarks in video and text about illegal aliens being transformed into “refugees.”

The worst thing that could happen to the left has happened in Germany.

Hundreds of young male refugees from the Middle East and North Africa are under suspicion for molesting hundreds of women.

The Chancellor of Germany Angela Merkel is under enormous pressure.

You’ll remember Ms. Merkel was the force behind Germany accepting more than one million refugees.

And many on the American left would like to do that here, as well.

In fact there is a campaign underway right now to re-brand illegal immigrants as economic refugees.

According to the polls, Americans do not want amnesty for illegal aliens, but accepting refugees sounds a lot better, doesn’t it?

Tomorrow in the State of the Union address the president will have a Syrian refugee sitting with Mrs. Obama, a message to be sure.

Now the sad truth is oppression is rampant throughout the world.

In the face of that the Democratic Party has basically become an open border organization.

They oppose a border fence.

They support amnesty for millions of illegal aliens already here.

And they oppose Kate’s Law, which would punish illegal alien felons who defy deportation.

That’s a pretty damning resume to most clear-thinking folks.

In the past three years women trying to illegally enter America through the southern border has more than doubled to about 120,000 apprehensions.

Unaccompanied children apprehended has also more than doubled almost to 40,000 in 2015.

And the left is labeling these poor people refugees.

If you live in Central America, chances are you are economically deprived.

According to a survey by Gallup, median income in America is about $44,000.

That’s the median income, half of all people down there take in less than that.

So you can see potential economic refugees are legion.

And then there’s the violence.

Much of the violence is generated by drug gangs who poison their own people and kill at will.

By the way, Sean Penn not real upset about these drug gangs.  We’ll get to that in our next segment.

So summing up, here come the refugees, plenty of them.

There are 16 million people in Guatemala.

Six million each in El Salvador and Nicaragua.

So you can see where this is going.

Finally, if you believe in Judeo-Christian philosophy, you must feel sorry for the common person in Central America.

Having spent some time down there, I can tell you the poverty is horrific.

But I can also say that America cannot accept millions of refugees from all over the world.

We are just about tapped out now with the debt approaching $20 trillion.

We should do what we can, but we must protect our country in the process.

And that’s the memo.