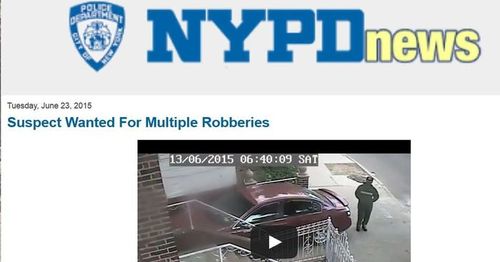 This is the description of what the man in the video below is doing in Brooklyn, on a regular basis.

The New York City Police Department is asking for the community's assistance in locating a a male wanted in connection with sixteen armed robberies that occurred in the confines of the 67 Precinct.

The suspect approaches the victims as they enter their homes, or forcibly enters the locations and confronts the victims. In all instances he displays a black firearm and demands the victims' property.

The expression "locating a a male" is in the original, and may represent where some Communications Division Sergeant forgot that he wasn't supposed to type "a black male" as is normal in police descriptions. A police "wanted" description always includes race—it's the first thing they ask.

And here's the police description—remember, they've not only got this video, but have interviewed sixteen victims of this guy in New York's 67th Precinct.

*The suspect is known to wear a green hooded sweatshirt and a baseball cap.

We are asking community members with information in regards to this incident to call the NYPD's Crime Stoppers Hotline at 800-577-TIPS. You can submit tips by logging onto the Crime Stoppers Website at WWW.NYPDCRIMESTOPPERS.COM or texting their tips to 274637(CRIMES) then enter TIP577.

Refrain from calling them up to say "Hey, I can add to that description, if it helps—the suspect is black!" They know, they're just not saying. Why not? Is it the DeBlasio influence?

What about the victims? Well, the NYPD isn't saying there, either. But they may be all black. It's possible that everyone in the 67th Precinct is black.

Here's a story about a march by "local residents" on 67th Precinct headquarters in 2013.

'There’s a lot of anger here': Riot breaks out in Brooklyn following candlelight vigil for 16-year-old shot by cops

Memorial for Kimani 'Kiki' Gray, who was fatally wounded by police Saturday after allegedly pointing a gun in their direction, turned ugly as nearly 100 angry mourners clashed with cops, tossing bottles and creating a melee.

As usual, of course, the "shot by cops" in headline should be "tried to shoot cops"—see here.

And crime like this is the result—as predicted: Diversity vs. Freedom (contd.): Crime will Explode If Racial Profiling Ends, by Sam Francis, May 10, 2001. But at least the NYPD isn't saying there's black crime.