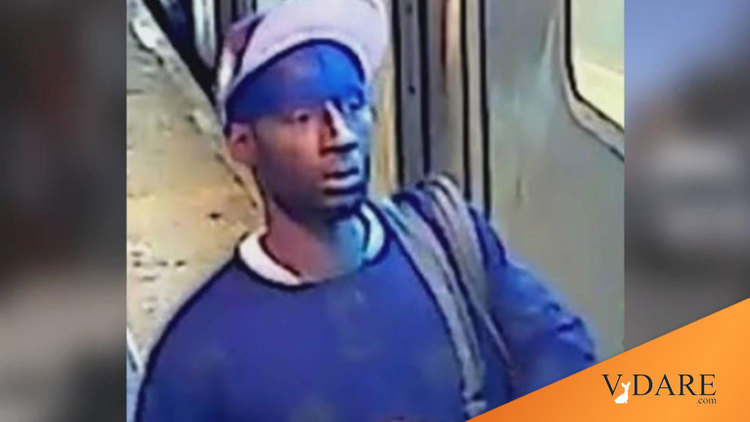 Just in case you thought that things in New York City couldn't get any worse than the last outrage you heard about, meet Frank Abrokwa, the Subway Poop Perp.

Here's what 37-year-old Mr. Abrokwa did to a 43-year-old lady on February 21st at a city subway station.

First he approached the lady, who was seated on a bench, and said, quote: "Hey, Mammy, how come you don't want to talk to me?" Failing to obtain a response that satisfied him, Mr Abrokwa retired to an idling subway car and pooped in a bag.

He then returned to the seated lady and assaulted her repeatedly with the poop, smearing it all over her face, hair, neck, shoulders and back.

Mr Abrokwa was arrested February 28th at the homeless shelter he lives in, and arraigned the following day in Bronx Criminal Court. The court freed him without bail. Mr. Abrokwa is black—"Abrokwa" is in fact a Ghanaian name—so I guess not to release him would have been hateful.

This guy has, according to the New York Post, 22 prior unsealed arrests dating back to 1999, when he would have been 14 years old, and dozens of sealed arrests.

I'm not clear what the difference is between sealed and unsealed arrests; but the fact of a guy as antisocial as that walking around free prompts the question: What are our jails for?

Oh right, now I remember: They are for cops who are restraining a perp twice their size when the perp dies of a drug overdose.

"Derek Chauvin was convicted three times because George Floyd is not just a man, he is also the Father, Son, and Holy Ghost of our new state religion." - @Steve_Sailer https://t.co/hYKyAPH4tf

They are for normal citizens looking out for the safety of their neighborhood when a lunatic tries to wrestle away a loaded gun from one of them.

"This is outrageous punishment for three men who clearly had no intention of killing or even harming anyone. Race was at the heart of this; if Arbery had been white, this case would surely never have gone to trial."https://t.co/1MNNgYK768

Those are the people jails are for—dangerous people, bad people.