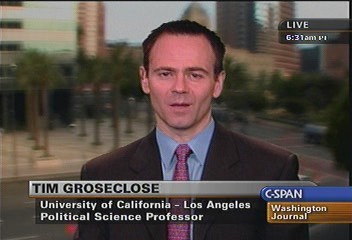 Professor Tim Groseclose has resigned from the Admissions Committee of UCLA, alleging that the university is illegally favoring black students in admissions. This is illegal under Proposition 209, which bans all state-sponsored discrimination by race. Although the admissions committee is not supposed to know what race a student is a member of, each student writes an "admission essay" which may provide a clue.

Campus officials have been under intense pressure to increase numbers of black students, particularly since a 2006 public outcry over the fact that only 96 of the nearly 5,000 freshmen who enrolled at the prestigious campus were African American.

This year, 235 black freshmen plan to enroll for the fall term, about 5 percent of the freshman class and more than double the 2006 number.

"There's circumstantial evidence to suggest some back door racial preferences are going on," Groseclose said.

The professor, who holds an endowed chair and has a background in statistical analysis, said he wasn't resigning from the Committee on Undergraduate Admissions and Relations with Schools over that issue, but because campus officials refused to provide him with the information he wanted to analyze the admissions.

Gloseclose said he wanted to use statistical analysis to study the probability that students were being admitted by race. He asked for 1,000 student files, including essays, with the names removed.[UCLA official resigns over admissions concerns | He suspects cheating in racial admissions, which are banned by state law. By Marla Jo Fisher, Orange County Register, August 28, 2008 ]

They wouldn't give him the essays, saying that they were private. Of course, this sort of statistical argument is the kind of thing that the pseudonomous La Griffe De Lion has been hammering away at for years. But even if you don't know statistics, the fact that admissions of black students have more than doubled in two years suggests that something is going on.

Professor Groseclose has a report called "Report on Suspected Malfeasance in UCLA Admissions and the Accompanying Cover-Up ", [PDF] which, according to Eugene Volokh, includes "letters from three other (nonvoting) committee members, including two student members, that support his view that the university has not been sufficiently willing to allow possibly critical examination of the underlying data..."

Groseclose traces the genesis of the new affirmative action policy to a frontpage article in the LA Times titled A Startling Statistic at UCLA.[By Rebecca Trounson, June 03, 2006] which revealed that only 2 percent of UCLA's freshmen were African-American. This statistic may have startled the LA Times, but I bet it wouldn't have startled Steve Sailer or La Griffe De Lion.