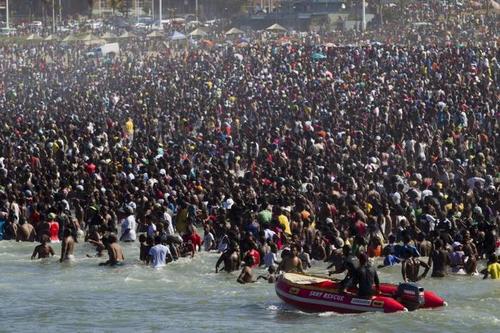 When thinking about the reasons for European politicians’ disastrous 2015 response to the Camp of the Saints, one subtle reason was likely due to the Establishment falling badly out of date on population trends.

By John Bongaarts, special to Humanosphere

Our planet is expected to have 11.2 billion people in 2100, according to the U.N.’s just-released revision of the medium world population projections. With a 2015 population of 7.3 billion, this represents an increase of 3.9 billion over the remainder of this century. The projected expansion of human numbers is very unevenly spread around the world, with declines in Europe and East Asia and modest further growth in South and West Asia and in North and South America. In contrast, sub-Saharan Africa is expected to continue expanding rapidly with its population quadrupling from 0.96 to 3.93 billion between 2015 and 2100. The bulk of future world population growth will be in this continent.

The new projection for the world is the highest ever made by the U.N. In fact, it is 2.1 billion higher than the U.N. projection published in 2004, which expected a world population of just 9.1 billion in 2100. A revision of this magnitude in such a short time is unprecedented. Also surprising, this upward revision is largely confined to one area of the world – sub-Saharan Africa – where the projection for 2100 increased from 1.9 billion to 3.9 billion inhabitants. Instead of expecting 1 billion more Africans according to the 2004 projection, the U.N. now expects 3 billion more by 2100 (see Figure 1).

The U.N. continuously monitors demographic trends in countries around the world and regularly updates its projections to ensure they are consistent with the most recent information. There is one obvious and welcome reason for the upward revision for sub-Saharan Africa since 2004: the success in conquering the AIDS epidemic over the past decade. …

Another, but less well-known, cause of the revision is the slower than expected decline in birth rates in sub-Saharan Africa over the past two decades. Until the late 1990s, conventional wisdom expected Africa’s fertility to follow the path of Asian and Latin American countries in the 1960 and ’70s, which saw fairly rapid fertility declines in particular when women gained access to schooling and to contraceptive methods. But in most of Africa, family planning programs have been neglected, and fertility declines have occurred later and at a slower pace than in other continents. In a number of countries in Africa, fertility rates have actually stalled after an initial decline.

A related reason is that record-keeping of births has improved in Africa. The U.N. demographers have discovered that their old estimates of the current number of births were undercounts due to African ineptitude. But as African governments have gotten better at counting, the size of the present population keeps getting re-estimated upward.

Adding 3 billion people to the world’s poorest region in the next 85 years will hamper development and may lead to a continent in chaos. …

What can be done? A straightforward and highly desirable solution exists: invest in voluntary family-planning programs. …

The rationale for these programs lies in the substantial unsatisfied demand for contraception in sub-Saharan Africa and throughout the developing world. … Yet a large proportion of these women (more than one-half in some countries) are not practicing effective contraception and are therefore at risk of pregnancy. As a result, unintended pregnancies are common. According to the Guttmacher Institute, more than one third of pregnancies are unintended in sub-Saharan Africa. …

The future trajectory of population is highly sensitive to minor changes in the fertility trend. As a result, any program-induced fertility decline can have a large impact on population growth. This impact can be estimated by a comparison of published variants of the U.N. population projections for sub-Saharan Africa. While the standard (medium variant) projection for sub-Saharan Africa expects 3.96 billion in 2100, the corresponding U.N. low variant projection (based on reducing fertility by a half birth during the projection) leads to a population of only 2.60 billion in 2100, a reduction of 1.4 billion. Past experience has shown that well-designed programs can reduce fertility by 1.0 to 1.5 births, and such programs, if implemented now throughout the continent, can therefore reduce the population in 2100 to or even below this low variant.

But, the world has to get started now on helping Africans be more responsible about reproduction. The more time the white countries waste worrying about whether helping African women not get pregnant is racist, the worse for Africa and the entire world.

With sufficient political will and resources, well-run voluntary programs have contributed to sustained declines in fertility and population growth across much of Asia, the Middle East and Latin America and in some countries in Africa, simply by permitting people to realize their individual reproductive goals. …

John Bongaarts is a vice president and distinguished scholar at the Population Council, an organization that conducts research and delivers solutions to improve lives around the world. Bongaarts is a member of the Royal Dutch Academy of Sciences and the U.S. National Academy of Sciences, and a fellow of the American Association for the Advancement of Science. He was named Laureate of the International Union for the Scientific Study of Population (IUSSP) in 2013.

Letter
A Reader Wonders What We AREN'T Being Told About George Floyd
MORE...
POPULAR TAGS