An excerpt from my new column in Taki's Magazine:

1987, the droll commercial illustrator Andy Warhol and the titanic sculptor Stanislaw Szukalski, illustrate much about how culture has changed over the last century.

For over 40 years, Warhol (1928-1987) has been famously famous for saying, ”In the future, everyone will be world-famous for 15 minutes.” Warhol’s own renown, however, is undying. Last week, for example, saw the opening of a musical with the onomatopoeic title POP! about Warhol’s shooting by an irate feminist in 1968.

In contrast, Szukalski (1893-1987) spent much of his life on the edge of poverty. Yet, Szukalski actually was

suddenly famous in his native Poland in the late 1930s. Then, much of his life’s work was blown to smithereens during WWII.

His works are vanished. He is without public, without critics, and so complete is the world’s ignorance of him that he may as well have never existed.

Yet, Szukalski toiled on, endlessly creating statues and drawings, a living legend to a handful of admirers, including Leonardo DiCaprio in 1980s Burbank. 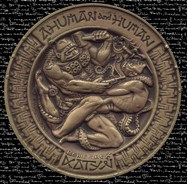 Szukalski’s politics weren’t helpful. In Chicago in 1914, to which his blacksmith father had brought him a half decade earlier, he was training 20 Polish boys in the manual of arms, ”So when the time comes they will be ready to go back and fight for the freedom of Poland.” Polish nationalism, however, was not exactly the most career-promoting ideological obsession for a 20th-century artist. To the right is his plate, Ahuman and Human commemorating the Soviet massacre of the young leaders of Poland at Katyn in 1940, which shows an ape in a Soviet Red Army uniform shooting a Pole in the back of the head.

As C. van Carter pointed out to me, Szukalski’s fan Jim Woodring wrote in ”The Neglected Genius of Stanislav Szukalski”:

Among his most strongly held (and extensively documented) theories was the notion that a race of malevolent Yeti have been interbreeding with humans since time out of mind, and that the hybrid offspring are bringing about the end of civilization. As proof of this, he pointed to the Russians.

Szukalsi dared the world that his stupendous talent would make it forgive his megalomania, obstreperousness, obsession with vicious apes, general craziness, and exquisitely bad manners, the way it had forgiven Beethoven, Wagner, and so many other artistic heroes.

Warhol, in contrast, invented a more consumer-friendly role for the artist in a culture tiring of greatness. Andy pointed out, ”Art is what you can get away with.”