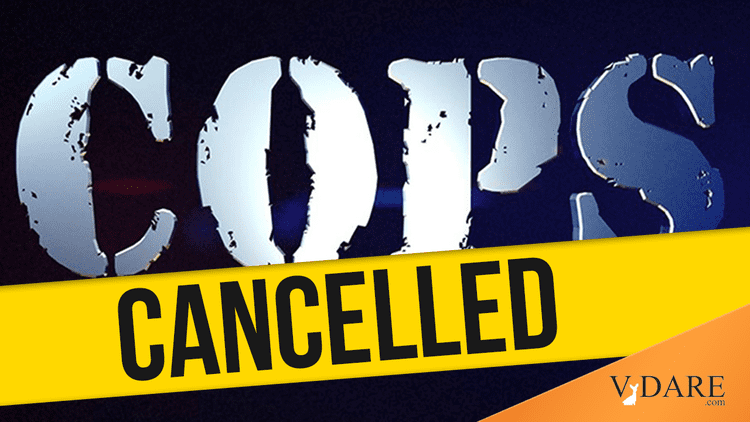 Even though the show’s creator admitted to working hard to dispel stereotypes of criminals (by showing more white people as criminals), Cops was cancelled. All in the name of a black criminal named George Floyd, who once put a gun into the belly of a pregnant woman during a home invasion.

Unbowed by the taboo, Ben Shapiro confronts both race and political correctness in his new book, Primetime Propaganda. Ben has provided another short clip exclusively to Townhall, this time featuring an interview he conducted with John Langley, the creator of the long-running FOX program, COPS. Langley says he’s irked by some media critics who accuse the show of perpetuating stereotypes about “people of color” by depicting a disproportionate percentage of minority suspects. Au Contraire, Langley protests, he intentionally shows an inordinate number of white suspects in order to side-step the facts. “I show more white people than, statistically, what the truth is.”

The move follows the ViacomCBS cable network’s decision to pull episodes of the show in the wake of protests against police brutality.

Paramount Network has pulled the plug on Cops for good.

The ViacomCBS-owned cabler had removed the long-running show from its schedule in the wake of nationwide protests following the police-involved death of George Floyd on May 25. Now, the network says it’s dropping the show altogether.

“Cops is not on the Paramount Network and we don’t have any current or future plans for it to return,” a network spokesperson said.

Paramount Network’s forerunner, Spike TV, picked up Cops in 2013 after it ended a 25-season run on Fox. The series continued following the 2018 rebranding of the channel as Paramount Network, which also had syndication rights to many past seasons.

Old episodes of Cops currently air on WGN America and the ViacomCBS-owned streaming service Pluto TV. WGN America’s commitment to the show expires at the end of June and the cable network, owned by Nexstar, doesn’t plan to renew it, sources told The Hollywood Reporter. The Pluto TV channel remains active, however.

Scripted shows, full of non-white actors, displaying diversity and multiculturalism as the greatest virtue, replete with white people cast as the personification of villainy, are all that will appear on network, cable and streaming TV.