Tucker Carlson Takes On The “Latino” Category, Tells Jorge Ramos “You’re Whiter Than I Am”

Dual Citizen Journalist/Agitator Jorge Ramos was interviewed by Tucker Carlson of Fox News, who asked him about his earlier “our country not theirs” comments.

What’s ground-breaking is that Carlson courageously questioned the whole “Latino” concept and pointed out that Jorge Ramos is himself white.

Here’s how the Daily Mail reports it:

Tucker Carlson on Wednesday [March 8th] had a tense exchange with Jorge Ramos on the issues of immigration and race, which culminated with the Fox News host declaring that the Mexican-born Univision anchor was whiter than him. Ramos, who is a senior anchor at the Spanish-language network, appeared on the program Tucker Carlson Tonight to talk about his stance on President Donald Trump's immigration policies. Fox News host Tucker Carlson tells Mexico-born Univision anchor Jorge Ramos 'you're whiter than I am' in heated debate about immigration by Snejana Farberov, Daily Mail, March 9, 2017

In response to the “our country not theirs” quote, Carlson asked Ramos “Who is they? Whose country is it not?”

There’s a video of the exchange embedded in the article which lasts less than five minutes, it’s worth watching.

Carlson began by introducing his Univision counterpart as one of President Trump's 'loudest critics on immigration' and then asked Ramos to clarify his recent comments about the United States being 'our country, not theirs.'

‘Who is the “us,” and who is the “they?”’ Carlson demanded of his guest. Speaking from Univision's Miami studios, Ramos explained that there are people in the country who want to go back to 1965, when there was a white majority, and who believe that Latinos, immigrants and refugees have no place here. 'This is not a white country. This is not their country. It is ours,' Ramos said before adding, 'this is a multiracial country and we must be tolerant.' 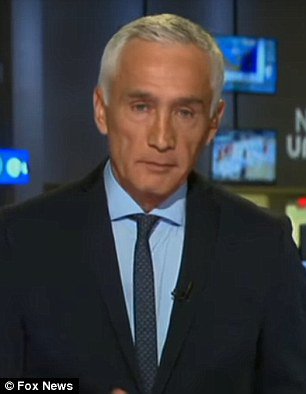 Correct me if I’m wrong, but I think tucker Carlson is the first Mainstream Media type to point out what should be an obvious fact if people weren’t so bamboozled by the “Latino” classification – that Jorge Ramos is white.

CARLSON TO RAMOS : “Let me just point out that you are white, obviously. You're whiter than I am: you have blue eyes, so I don't know exactly what you mean by white or Latino.”

Jorge Ramos didn’t even try to respond to that and just shrugged it off with his hands and head.

In the course of Wednesday night's tense on-air clash, a seemingly befuddled Carlson pressed Ramos to explain the term 'Latino,' arguing that various groups that traditionally fall under that category, including Afro-Cubans, German Guatemalans, non-Spanish-speaking Peruvians and 'blue-eyed rich Mexicans like you,' seem to have little in common and don't even like each other.

On the contrary, Daily Mail writer, Carlson was not “befuddled”, but rather taking on the contradictions of the whole Latino category.  Here’s more:

CARLSON TO RAMOS: You have posited yourself as a leader of Latinos and I’m not exactly sure that that means. Latino seems to encompass – I don’t know, German-Guatemalans and Italian-Argentines and Afro-Cubans and non-Spanish speaking Peruvians and, I don’t know, blue-eyed rich Mexicans like you. What do those groups have in common, exactly?

Carlson understands that, whatever else it is, the Latino category is an example of political power:

'It still doesn't make any sense to me at all. But as a political matter it makes a lot of sense because it allows people like you to say, "I represent everybody on an entire continent."' he said.

It’s too early to tell, but could the Trump Era be an era in which certain taboo topics can be openly discussed?